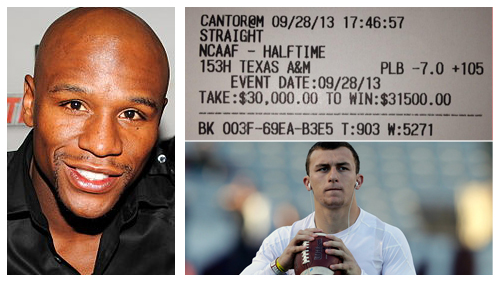 Looks like Floyd Mayweather Jr. isn’t about ready to jump off the Johnny Football bandwagon just yet.

A week after winning $200,000 on Manziel and Texas A&M covering the first-half spread against the SMU Mustangs, Money May once again put money down, this time $30,000, on the Aggies to cover the first-half spread against the Arkansas Razorbacks. It didn’t came close to the $200,000 he scored last week, or the $300,000 he told Howard Stern he was going to drop for this wager, but hey, $30,000 is still $30,000. Unless you’re Floyd, who treats such amounts as boring money.

Then again, it still shows that Floyd still has betting limits and won’t hesitate to cut his bets when he finds it too dangerous to lay out that much money on a line he wasn’t apparently as confident as we all thought. When prodded by his Twitter followers why he bet only 10 percent of his promised $300,000, Money May explained it through a tweet, saying “When the betting line changed from -3 to -14, I couldn’t bet $300k. Too dangerous.”

A dramatic swing in the spread is a legitimate cause to pause, something Mayweather smartly did even if he was able to find a middle number at -7 to put his $30,000 on. He did win on a $100,000 bet on the Miami Hurricanes to hit their -9.5 first-half spread against the South Florida Bulls, which they easily covered when it led at the half, 35-7.

But for all his betting winnings, Mayweather apparently also had some losing bets over the weekend, including $40,000 on the second half of the Canes-Bulls game. But that money only cut back on what looks like another winning weekend for the Money Man.

Good thing he didn’t lay any money on USC covering the spread against the Arizona State Sun Devils at Sun Devil Stadium.