The World Series of Poker Circuit (WSOPC) at the IP Biloxi has cruised through the first eight events, and Nolan Burton, Joshua Evans and Jin Lee are the latest winners of WSOPC gold rings. 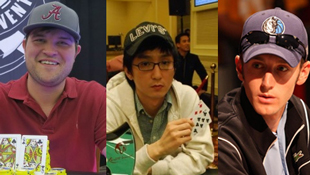 It’s not been a good month for live gambling in America. Both the M Resort and Circus Circus hotel & casinos have closed their poker rooms in Las Vegas; and gaming revenue is down in Nevada, New Jersey, Ohio, Michigan and Missouri.

Fortunately, the strength of the WSOP brand has stood strong amidst this calamitous time, with field sizes at WSOPC IP Biloxi increasing upon their showings last year. We have now seen eight events played in the first series of the year, and attendance increases have been seen in virtually every event.

The women are continuing to show the men that they can flick cards around with the best of them. Donna Murray’s final table appearance in Event #7 was the fourth female appearance at a WSOPC final table at IP Biloxi, following on from the wonderful showing of female players at this summers WSOP proper.

159 players entered Event #6 $365 No Limit Hold’em (NLHE) Six-Max, and Nolan Burton dipped into the $47,400 prize pool to take his cut of $12,877. The 26 year old from Birmingham defeated Billy Mann in heads up action to record his most impressive score to date.

Joshua Evans won his second WSOPC event when he overcame 65 players to win Event #7: $365 Pot Limit Omaha (PLO) for $6,825. Evans took the six max title in Rincon last season, and finished third in the inaugural WSOP National Championships back in 2011. This was his first-ever cash in a PLO tournament after winning over a million playing NLHE.

Finally, Jin Lee took Event #8: $365 NLHE after defeating 169 players. Lee captured $13,689 for first place after it took him over three hours to defeat Cori Wunstel in heads up action (It only took two hours for the final table to reach heads-up).

Lee’s victory was bittersweet as he eliminated his best friend Liang Lee in fourth spot.

“It’s very hard to play against someone that’s your best friend,” Lee said. “You want to see him finish as high as he can and I think that made it more difficult for me. I was very proud of him for making the final table.”