Ylon Schwartz, the 2008 November Niner, and World Series of Poker (WSOP) bracelet holder, has just won his first WSOPC gold ring, after achieving victory in Event #5 $365 No Limit Hold’em (NHLE) at the IP Casino Resort and Spa in Biloxi. 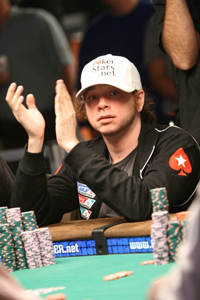 The WSOP brand has been good for Schwartz, with 21-WSOP cashes contributing towards a princely sum of $4.7m in live tournament earnings stretching back a decade. Schwartz picked up $12,474 and the WSOPC gold after defeating Christopher Hall in heads-up action.

Schwartz bucked the trend when being interviewed after his victory, preferring to be more authentic about the state of his game, “[My game] has probably degraded [since the November Nine],” Schwartz said with a laugh. “I was hungry back then. Now things are a little more cushy. I drink a bit more wine and I own a bar. I’m probably a weaker player than I used to be.”

Schwartz becomes only the fourth player to ever follow up a November Nine appearance with a WSOPC gold ring victory: John Dolan, Michael Mizrachi and Dennis Phillips the other three players to hold that honor; and Dolan also made the final table in Event #2 at Biloxi where he finished in fourth place.

Schwartz defeated a field of 154 entrants and a final table that included Allan Farber (8th) who just like Schwartz was making his second final table appearance of the Biloxi series.

We have two other events to round up in our WSOPC Biloxi news. Tam Nguyen defeated 571 players in the series biggest field so far. The tournament was a £365 NLHE Re-buy event and he took down $35,978 for his win.

Event #4 $365 NLHE saw Andrew Kattner take home the WSOPC gold ring after he outlasted 127 players on his way to victory. Kattner took home $10,668 for his win.