The European Poker Tour (EPT) final table live stream is one of the best in the business. A classic case of what can be achieved if you invest enough time and money into a product, and so it’s unfortunate that the product faltered during the final table coverage at EPT10 Barcelona. 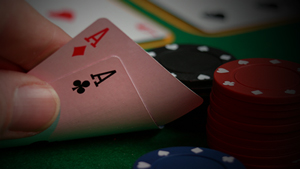 Coverage was regularly impeded by the live streams inability to keep up with the unprecedented number of viewers, and yet it wasn’t the hi-tech gremlins that caused the most consternation. Instead, that was reserved for the tedious and lengthy negotiations that took place between the final players after play reached four handed.

If you didn’t catch the coverage of the live stream let me give you the version of events in a nutshell:

Once Pasi Sormunen is dispatched to the stands, in fifth place, by Luca Fiorini, there is €2,460,500 in prize money for the remaining four players. A brief discussion about a deal brings the Tournament Director Toby Stone to the table with laptop in hand, and one can only assume that Stone is showing the players the division of money by ICM calculations.

Middleton tells the other three that he is the most experienced player at the table and demands more money. The Dane and the Fin seem to agree, but the Italian doesn’t want to deal. Fiorini has all of the chips and it seems he doesn’t believe the edge that Middleton says he has is that sharp.

Middleton goes to the rail to talk through the deal with former EPT Champions Jake Cody and Toby Lewis, and former EPT runner-up Fraser McIntyre. The whole set of conversations are filmed by the EPT crew and it becomes apparent that Lewis is backing Middleton.

The net result of Middleton’s discussion with his backer is there is no deal. Play resumes after a gap of between 30-60 mins in play, resulting in a flood of complaints from the viewers, about hosting a negotiation in the middle of what was turning out to be fantastic viewing for the fan.

I reached out to Fraser McIntyre to ask his opinion on the EPTs handling of final table negotiations and have a few thoughts of my own.

‘It’s my belief that only a tiny percentage of people are bankrolled adequately to play in 5k plus events,” McIntyre tells me before continuing, “It’s therefore accepted that one way to play in these events is through staking. I don’t really see a problem in others investing in your talent. It’s just a business decision, and all smart businesses invest in their people to some extent of another.”

Some of the viewers at the final table live stream, couldn’t comprehend how a player, who was being marketed by the media has having won close to a million dollars in live tournament earnings, was being backed to play in a 5k event.

McIntyre hits the nail on the head when he makes reference to the small amount of players who have the bankroll to play 5k events under their own steam. The Hendon Mob database can be misleading to the general public because it doesn’t take into consideration the players costs. Middleton does not have $1m in profit; he has $1m in earnings before costs are deducted.

Middleton used to be backed by Chris Moorman, but as the final table negotiations show he is now being backed by Toby Lewis, or at least was in the EPT Barcelona event. Middleton qualified for the event through a satellite on PokerStars, but as he is backed by Lewis then it is the former EPT Vilamoura champion who has effectively paid for Middleton to play in the €5k main event.

Backing arrangements differ enormously, but one of the most commonly used is the make up arrangement. Under these circumstances even the very best players in the game can rack up large amounts of make up (money owed to the backer) through either variance or just bad play. It is therefore not inconceivable that when Middleton reached the final table, he could have finished in eighth place and the €102,430 prize money could have ended up in the bank of Lewis, without Middleton seeing a penny. This is why it is so important for the backer to be included in the negotiations.

“It does make it tricky when situations arise like they did at the final table in Barcelona; but effectively backers have a voice when deciding how much return they should be receiving through a deal that their player is about to make. At the end of the day it’s their investment.” Said McIntyre.

There used to be a time when deal making was carried out away from the glare of the media headlights. In fact, only PokerStars have this transparency, and allow final table negotiations to take place during the live stream, and only in the past two seasons.

I for one think it was the right decision, and the shenanigans of EPT10 Barcelona have done nothing to change my mind. It’s time the poker world woke up and realized that it can do more to dispel the view that poker is nothing more than a hiding place for cheats and crooks, and being more transparent in it’s dealings is a step forward into the light.

To believe that deal making is not carried out on the other tours is naive. The Holy Grail for the tour organizers is to see that seven figure score up top. This pursuit can sometimes skew the money jumps, especially in the top three spots. For most poker players it’s all about the money. There is no desire to add an EPT trophy next to the under 11’s Supplementary Cup winners medal on in their dusty trophy cabinets.

“I like the openness that the EPT are trying to present on a lot of fronts. I think it’s good that poker is run in an honest and transparent way. I also think it’s appropriate that people are privy to the actual payouts, and deals made, as opposed to leaving the prize fund unaltered after changes to the payouts have been made.” Said McIntyre.

The one problem you have with transparency is the players forget they are being filmed. Whilst the negotiations can be part of the theatre, it can be a tripping hazard for players as they start to talk openly about the lack of skill and experience of their opponent’s. There is also a privacy issue, as backers may not want their identity revealed, yet still need an input into the negotiations. The EPT camera crew followed the UK negotiation team even as they moved away from the final table to have a private discussion.

I am fortunate to have been present at major final tables all over the world, and for all of the major organizers, and I have seen it all. I remember the wonderful debate between Mohsin Charania and Lucille Cailly at the final table of the EPT8 Grand Final in Monte Carlo, and how it brought an extra spice into an already lively final table; I was in Marrakech for a World Poker Tour (WPT) event where the Latvian, Maksims Martinovs, was railroaded into a bad deal by a herd of partisan Moroccans; and I was also present at EPT8 Loutraki when Greek laws meant a deal could not be made, and the final three players produced some awe inspiring action as the differences in pay jumps meant what they said on the tin.

I believe that transparency is key and it creates a safe environment for the inexperienced players in the game. I also believe the backer’s reserve the right to be apart of the negotiations, but the tour operator must put a time limit on discussions. In terms of recording the negotiations there needs to be clearly defined rules between operators and players as to the boundaries of filming; and I believe this should remain on the table, with off the table discussions being the rare exception and never filmed. This keeps the intensity of the moment for the viewers but also a little privacy for the player and his backing team.