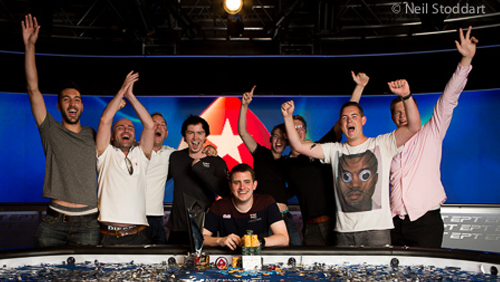 The European Poker Tour (EPT) Barcelona has ended in triumph for the UK, as Tom Middleton becomes the latest player to hold aloft the EPT trophy after defeating Kimmo Kurko heads-up at the Casino Barcelona.

The action started fast with only 17 hands tucked into the belt before we lost our first competitor, Andreas Christoforou, after the Cypriot bowed out in eighth place, for €102,430, in a hand that Kresten Nielsen will still be have nightmares about.

Nielsen opened the action with pocket tens, Christoforou moved all-in holding ace-jack, Kimmo Kurko did likewise with pocket jacks and after some time in the tank, Nielsen folded his hand. The dealer then proceeded to put down a flop of [Qh] [Ts] [5h] – which would have given Nielsen a set – the [4s] and [3h] finished the action, Christoforou was out, Kurko had doubled up and Nielsen was left with some results orientated thinking.

Eduard Bhaggoe would leave in seventh, but not before first doubling up; Bhaggoe getting through Tom Middleton when his ace-five caught a five on the flop to double through the man from the UK’s ace-queen. A few hands later and he was all-in again. This time his pocket tens came up against the [Ah] [Kd] of Kurko. The flop seemed safe enough for Bhaggoe –  [Td] [8h] [7d]  – but that would soon change. The [2d], and [4d], handing Kurko a backdoor flush and a stunned Bhaggoe was out.

With just six players remaining we saw Tom Middleton on the ropes. He was all-in holding the pretty looking [Jh] [Th] and the Italian Luca Fiorini had joined him with pocket nines. The UK rail sucking a jack and a ten out of the deck to hand Middleton the double up.

Then we lost Benoit Gury in sixth for €188,000 in a blind skirmish. Nielsen moving all-in from the small blind holding [Ac] [6h], and Gury snap-calling with the far superior [Ad] [Kd] in the big blind. Gury was looking good for the double up, but a six on the flop changed all of that and five community cards later Gury was out.

Pasi Sormunen was the next player to be eliminated from the competition when he left in fifth place. The Fin got caught with his fingers in the cookie jar after four bet jamming with [Kd] [7d], against the Fiorini’s [As] [Kc]. The Italian made the simple call and the hand held to send Fiorini into the chip lead, and Sormunen over to the cash desk to collect his €253,000

The four handed action didn’t get underway for a long time as the remaining players started deal negotiations. The EPT are the only major live poker operation that not only openly allows deal making at the final table, but also embraces it and films it while it is happening.

The main protagonist in the deal was Middleton, who quite rightly believed he was the better player and therefore wanted a little bit more money than the ICM value of his chips. Fiorini was then painted as the antagonist as the chip leader refused to offer the man from the UK the money he wanted.

Middleton went back to his rail and it was determined that the money should be a side issue as Middleton was clearly the better player. Jake Cody, Toby Lewis and Fraser McIntyre cutting a deal to insure Middleton’s value and the deal for the players fell apart.

It seemed that Fiorini had at least €600,000 locked up during those early negotiations, and sadly for the Italian he would take home half of that after falling from grace in a heart beat; Kimmo Kurko taking the chip lead when he flopped second pair on [Jd] [7d] [4s], holding [Th] [7c], and got it in against Fiorini who was holding [Td] [9d]. Fiorini was actually a mathematical favorite to win the hand but the turn and river bricked and he was the shortest stack at the table.

Then after doubling through Kurko: treys versus queen jack; Fiorini was eliminated in fourth place for €328,000, after calling an all-in from Middleton holding ace-jack. The man from Leeds was holding pocket queens, the ladies held and suddenly there was only three players left.

The three-way action wouldn’t last long before a trigger happy Dane left the party in third. Nielsen and Kurko were playing a hand in the blinds where Nielsen was holding [Kd] [8d] and Kurko was holding [7c] [4c]. The dealer put the flop of [8s] [6d] [5h] onto the felt to hand Kurko the straight and Nielsen top pair, and Nielsen pushed aggression to limit as he forced the all-in between both players. It was a rash decision, considering how deep both players were, and five cards later Kurko and Middleton were heads up as Nielsen left with €440,500 reasons to still find a smile.

The heads up action started with Kurko with a small lead: 19.6m versus 17.2m. The couple once again entered negotiation mode and this time – after a much shorter negotiation – the agreement was reached for the winner to take home €942,000 and the runner-up €750,000.

Kurko seemed the most likely to take that €942,000 when he was quickest out of the traps – the Finnish player winning almost every pot of note in the early stages. Then the dinner break broke that streak, and when they returned Middleton stepped his foot on the gas and just took off.

With the rail singing and dancing, Middleton just moved up in gears and ground away at the Fin until they reached the tournaments final hand. Kimmo Kurko opened the button holding [Ac] [4s], Middleton made the three bet with pocket fives, Kurko moved all-in, Middleton called and after the baby pair held, Middleton was crowned the first EPT Champion of Season 10.

One man who doesn’t do deals at final tables is Daniel Negreanu. The Canadian has been one of the players of 2013, and for a long while looked like he was going to snaffle his second major victory in the €10k High Roller, when he entered the heads-up phase of the competition with 6:1 chip lead over the Austrian Thomas Muhlocker.

Muhlocker’s first double up came when Negreanu moved all-in with pocket fours and the Austrian looked down to see pocket aces. That pushed the pair closer together and they would soon change places in the pivotal pot of the competition.

Once again Negreanu was all-in holding pocket fours and this time the Austrian had him dominated with pocket nines. A nine on the turn helping contribute to a full house for Muhlocker and just like that he was the favorite to take the title.

The final hand was another cooler as Negreanu moved all-in holding ace-queen and Muhlocker once again found a dominating hand in ace-king. A king on the flop, handing Muhlocker top pair, but it also gave Negreanu a Broadway straight draw. Neither the turn nor river wanted to dance in the lights and Negreanu was out in second for €263,800, as Muhlocker picked up his biggest win of his career.