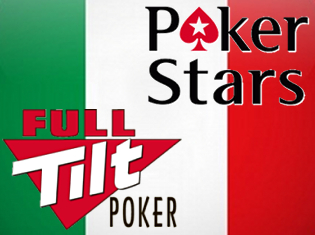 Online poker giant PokerStars has been forced to resort to imaginative ways to repay Italian poker players whose deposits vanished when Full Tilt Poker (FTP) gave up the ghost shortly after Black Friday. When Stars agreed to its $731m civil settlement with the US Department of Justice a year ago last month, it assumed ownership of FTP as well as the responsibility to repay the account balances of FTP’s former players outside the United States.

By most accounts, the repayment of FTP’s ROW players was a pretty hassle-free affair. In France and Spain, the local gaming regulators allowed players to withdraw their funds via PokerStars’ licensed .fr and .es sites. But that method wasn’t an option in Italy, where FTP had never obtained a license to offer online poker to Italian citizens. As a result, FTP’s activities in Italy were considered to be illegal and Stars attorneys concluded that remitting FTP account balances directly to players would amount to distributing the proceeds of illegal activity – and Stars’ deal with the DOJ expressly forbid it from breaking any local laws via the remission process.

In order to find some equitable solution, Stars considered donating the total amount owed to Italian charities, or holding onto the sums until notoriously ineffectual Italian lawmakers could revise legislation to permit a scheme similar to what went down in France and Spain. In the end, after consulting with Italian attorneys and local poker pros, Stars has decided to launch a Tilt Mania promotion that will see the site give away €2m to its Italian players between now and the end of the year.

In a statement on its Italian blog, Stars acknowledges that some of its players who never held FTP accounts will benefit from the promotion (as, undoubtedly, will Stars itself). But limiting involvement in the promotion to FTP’s former Italian players would create the same money laundering concerns as paying them directly. Stars maintains that extending the benefits of this promotion to the entire Italian poker community is the only way forward. Full details of the Tilt Mania promotion, which involves all cash game, SNG and MTT players, are available on PokerStars.it.