It was Ralph Waldo Emerson who said, ‘The ancestor of every action is a thought,’ and for the author James Leighton, his magical thought came to him whilst reading a newspaper article about a young Australian named Daniel Tzvetkoff. 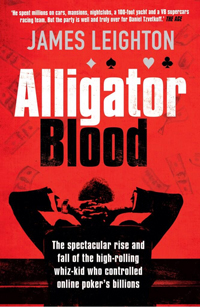 The story interested Leighton, not only because he is a fan of poker, but also he is a fan of story. Coincidentally, Leighton was due to meet his publishers Simon & Schuster, that very week, to discuss his ideas on a follow up book to his 2012 biography on the former Busby Babe Duncan Edwards.

“It was my wild card. To be honest I half expected them to tell me that someone else was writing it, because it was such a great story.” Said Leighton.

Luck and poker are inextricably linked, and so it should come as no surprise that it was sheer luck that a young author from Cardiff should find an interest in a former millionaire from Brisbane; a piece of luck that has resulted in 308-pages of cracking writing.

Alligator Blood is an amazing read and I want to call it the greatest poker book I have ever read, but it isn’t a poker book, it’s a thriller. Throughout most of the book Leighton writes in the third person. The chapters are compact and bijou yet full of quality; each one ending with an Adam West-Batman style over-exaggerated question mark leading you hurriedly into the next chapter, and then the style changes and suddenly you are in first person as Leighton switches his emphasis from the main plot to give you an understanding of high stakes poker through an interview with Brian Hastings on that infamous slaughter of Isildur1.

It shouldn’t work…but it works to perfection. Even the title of the book drips off your tongue with cinematic experience written all over it…. Alligator Blood. Make no bones about it, this story is so intriguing, and interesting, that we will see James Leighton’s name adorning the black screen as we hide our empty popcorn cups underneath the seat and head out of the cinema door.

Leighton breathes fairy dust into the lungs of the characters and they jump out of the pages with life. So much so that the release of the book is bound to be accompanied by a hailstorm of protest from those that find themselves in the starring roles. Sam Sciacca comes across as a man who just wants to run a business all the while struggling to keep control of his partner Tzvetkoff, who comes across like a six-year old kid in a candy store and a £10 note in his hand. Then you have Curtis Pope, who without doubt comes across as the main antagonist in the movie…but wait…shouldn’t that be the role that Tzvetkoff is playing?

At times it was a little like watching Hannibal. I know that Mads Mikkelsen carves peoples guts open and eats their livers raw, but I can’t help but like the man. The reason I ignore Hannibal’s psychotic tendencies is through great writing, and Leighton does the same as I grew attached to Tzvetkoff, and actually felt a little sorry for him. I know that probably goes down like an Eddie Murphy stand up slot in a birthday party for Hitler, but like I said it’s a great story and that’s what great story does to you. It pulls you in, tosses you about and leaves you feeling the emotions of the characters as if you are inside their very skin.

From Pizza Hut to partying with Mike Tyson to ending up in prison, now that’s what I call a ride. Not only will poker players and enthusiasts love this book, but so will people who know nothing about the flop, turn and river.

The spectacular rise and fall of the high-rolling whiz kid who controlled online poker’s billions – how could it fail to entertain?