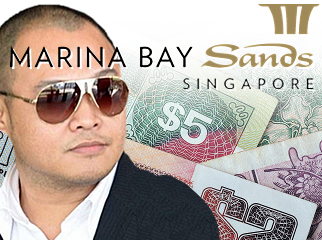 Singapore’s High Court has ordered a casino gambler to make good on the marker he rang up at Las Vegas Sands’ Marina Bay Sands (MBS) casino. The ruling is notable in that it represents the first casino debt collection trial in which the defendant sought to avoid having to repay his debt by alleging “technical contraventions” of Singapore’s Casino Control Act and the Casino Control (Credit) Regulations 2010.

In March 2011, Sands sued Lester Ong Boon Lin (pictured) over his failure to honor the nearly S$241k (US $191k) debt he’d rung up gambling at the popular Singapore casino. Ong, the 33-year-old son of a wealthy rice merchant, had been granted credit by MBS on the grounds that he was a “premium player” as defined by the local regulations. Ong earned this designation by depositing S$100k into an MBS account on May 1, 2010, prior to his arrival on the casino floor.

Ong later withdrew the S$100k from his account, but continued to gamble on S$1m credit provided by MBS, ultimately losing a total of S$240,868. Later, Ong claimed that since he’d withdrawn the deposit from his MBS account, his premium player status should have been revoked, making MBS’ advancement of credit an illegal act and freeing him from the responsibility of paying up.

In issuing her ruling, Justice Lai Siu Chiu said that at the time Ong was gambling at MBS, there was nothing in Singapore’s regulations that required premium players to maintain a certain balance in their casino account. As such, Ong was considered a premium player for a period of one year following his original S$100k deposit, regardless of whether the balance went up or down, so long as the account remained open. Lai noted that Singapore has since amended its regulations to more tightly define premium player status, but as these amendments were made long after Ong ran up his tab, they had no bearing on his case.

Lai ordered Ong to repay the full S$240,868, plus 12% interest per annum calculated from Aug. 15, 2010 until the debt is paid in full. Ong is also liable for MBS’ legal costs, which have yet to be determined. MBS was represented in court by Harry Elias Partnership, which is also handling 35 other gambling debt collection cases for MBS. Ong’s lawyer told Business Times that his client would be considering his options.