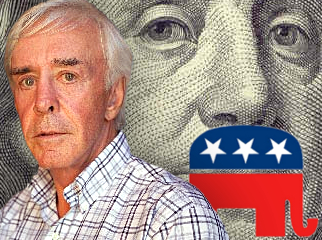 Walters and Luce are also CEO and president respectively of The Walters Group, a Las Vegas-based real estate outfit with a fondness for high-end golf courses. During his 2011 profile on 60 Minutes, Walters humble-bragged about having once won $400k wagering on a single hole and $1m on a single round. A former maintenance director of one of Walters’ golf courses pled guilty in February for ‘messenger betting’ on behalf of Walters’ betting syndicate ACME Group Trading.

The $100k donation to the GOP – the super-PAC’s second largest single contribution – isn’t Walters’ first financial foray into politics. Walters contributed $25k toward Clark County Commission officials seeking reelection in 2012, although he described them as “investments” rather than contributions. Nevada journalist Jon Ralston reported that T STAR III has contributed a total of $15k to other Nevada-centric races since 2011. The GOP super-PAC that received T STAR III’s $100k has close ties to House Speaker John Boehner, who played a round of golf with entrepreneur/buffoon Donald Trump after his $100k donation in 2012. Will Boehner be teeing up with Walters next, and if so, how hard will the ever weepy Boehner cry when he loses?

The GOP’s natural antipathy toward all things gambling makes Walters’ allegiance even more of a mystery than that of Sheldon Adelson. Then again, considering that Walters is widely presumed to make most of his high-volume wagers with international online sportsbooks rather than at Vegas brick-and-mortar books – whose betting windows tend to slam shut whenever Walters or anyone who looks like him approaches – maybe Walters is just pissed at the way the US Department of Justice has gone after those online sportsbooks since President Obama appointed Eric Holder as Attorney General. As Guido the Killer Pimp from Risky Business so eloquently put it: In a sluggish economy, never ever f**k with another man’s livelihood.