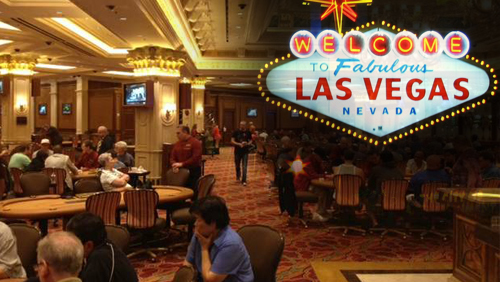 Poker players are, generally speaking, a fairly disorganized lot. That’s only natural; after all, at the tables it’s every man for himself and teaming up together is specifically prohibited by the rules of the game. The natural intelligence of many of the people drawn to the game also usually comes along with a wide streak of independence. It’s factors like these that can make joining together for causes bigger than any single individual tougher for the poker community than it is for other groups without such underlying obstacles.

Coming together for a common cause is exactly what some poker players tried to do recently in a boycott of the Venetian poker room, organized by longtime poker media presence and WSOP Media Director Nolan Dalla in the wake of negative comments by Las Vegas Sands CEO Sheldon Adelson about poker in general (“That skill base is, in my opinion, just a bunch of baloney”) and online poker specifically (“a societal train wreck waiting to happen”). In a June 27th blog post, Dalla rallied the community to boycott the Venetian for the five days from July 22nd to July 26th.

Dalla said during the boycott that he considered it a success because it raised awareness of the issue at hand (namely that Sheldon Adelson is a rich jerk with a chip on his shoulder who’s willing to insult and hurt a lot of other people for the sake of indulging his own moralistic whims). “Frankly, I don’t think there is a metric to measure how effective the boycott will be,” he told Vegas Inc in an article examining how little direct impact the boycott had on the Venetian. “This was about awareness, and to that end, we have been successful.” Most of that awareness was raised during the WSOP, when Adelson’s comments were fresh and most of the world’s poker players were gathered in one place, making it easier than usual to spread information. When Marco Valerio of QuadJacks talked to Dalla during the boycott, Dalla underlined that much of the awareness-raising had already been done in advance of it. “(W)e’ve already succeeded,” he said. “Everyone in poker recognizes how ludicrous Sheldon Adelson’s comments were, whether they actively boycott or not.”

Last year when the Chick-Fil-A restaurant chain was under fire over its CEO’s opposition to same-sex marriage and facing a boycott, Daniel Diermeier, a professor at the Kellogg School of Management at Northwestern University in Chicago, penned an article for the Harvard Business Review called “When Do Boycotts Work?” In his post, Diermeier described four criteria for successful boycotts: the customers must care passionately about the issue at hand, the cost of participation must be low, the issues must be easy to understand, and the mass media is essential. A look at the Venetian boycott through the lens of these standards makes it easy to see why Nolan Dalla et al. never aimed any higher than raising awareness:

There were definitely poker players out there who cared deeply and passionately about Sheldon Adelson’s moral crusade, especially after reading his comments about the skill involved in playing poker being “baloney.” Whether it was the inherent hypocrisy of a casino company’s owner decrying the very same business if it’s conducted on computers, the myopia with regard to the how much the internet could benefit the Nevada gaming industry, or just the old man’s ham-fisted approach to the whole situation, there was no shortage of opposition to Adelson himself. But as a percentage of the overall poker-playing population at the Venetian, they were never going to have the numbers to make a dent in the room’s business. At the end of the day, most poker players – especially those who make their living from the game – simply want to sit down and play.

2. The cost of participation must be low

In some ways the timing of the boycott raised the cost of participation. Had it taken place during the WSOP, when there are multiple tournament series running around Vegas across a wide range of buy-ins, the cost of boycotting the Venetian would have been relatively low for many players. It would also have depended on a mass of players not from Vegas who were in town for the summer. By waiting until after the WSOP, the boycott lost the potential participation of these players and had to rely on local pros and tourist cash-game players.

Those locals who didn’t care for Adelson’s sentiments or methods had plenty of other options for playing poker during the boycott. But some simply weren’t willing to give up playing at what’s recognized, both for the level of service as well as or the games on offer, as one of the single best poker rooms in Las Vegas. As for the out-of-towners, who take up a lot of seats at the tables on the Vegas Strip, they often plan their trips weeks or even months in advance and many of them like to play where they stay, or at least close to it. Anyone staying at the Venetian or near it at the north end of the Strip could be forgiven for seeing the boycott less than ideal.

3. The issues must be easy to understand

In one regard, this was probably the single strongest point in favor of the Venetian boycott. Adelson has been a consistent voice against online poker for several years now. His comments about online poker were the same pablum he’s been known to spout in the past, meaning there was no new information for anyone to process. There really couldn’t be a much simpler (or more emotionally resonant) message than “Sheldon Adelson hates poker and poker players.”

But once the argument turned to the online poker portion, things were more complicated. Adelson is known for throwing his money around at politicians and trying to win debates with his wallet, but it’s not like the rest of the industry has been clamoring for it online to be stymied by his power. Most of the Vegas establishment was against online poker before having a change of heart. Aside from that, any jobs that Adelson might cost Las Vegas with his stances are still theoretical at this point, and the march to legalization is all but inevitable. All Adelson can really do is prolong it before eventually shuffling off this mortal coil. Thus the issue is obscured for people who aren’t directly offended by his comments, or who have never relied on online poker for their income.

4. The mass media is essential

In this regard, the boycott was never going to be able to amount to much. The poker media covered the boycott from its earliest planning stages, which was to be expected. But the poker media itself is relatively small in numbers and in reach. Local Vegas media didn’t have much to say about the boycott, until it had begun and clearly wasn’t affecting the Venetian’s bottom line. As for anyone at a regional or national level, this was essentially a non-story. Compare the poker players’ media presence with Adelson, whose article that prompted the boycott in the first place appeared in Forbes, a national media outlet. Forums and blogs are where this issue was talked over, and those simply don’t have reach as traditional mass media, nor the same function – namely, to tell people what to do and what to think.

With these four points in mind, it’s no wonder the boycott of the Venetian turned out the way it did – a lot of talk and much less action. Given that the organizer never aimed for anything higher than that, it’s hard to see it as a true failure. But calling it a success would also be a stretch. The Venetian didn’t see any noticeable dip in business. And as Dall a himself noted, there was no real metric for measuring how well the boycott did. In the absence of either of those things, victory simply isn’t possible. But a draw isn’t a loss, so at least poker players have that going for them. Now if they could just find a way to measure a win that consisted of more than talking to each other about what a joker the old man screaming at the kids to get off his lawn is, they’d be in good shape.