Short and Sweet With Rupert Elder

There was time in Rupert Elder’s life when he was content to just earn a few quid playing online cash games. On Sunday’s he would play a few online tournaments just to see what all of the fuss was about, but he was content. He was happy. Then on Tuesday 3rd May 2011, all of that changed, after Elder took down one of the biggest live prizes of the year, the European Poker Tour (EPT) event in San Remo for $1,355,488. 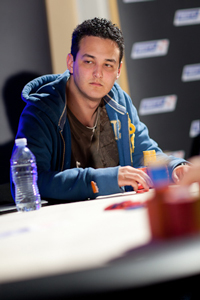 Elder carried that confidence into the 2011 World Series of Poker (WSOP) where he made 132nd place in the Main Event for a $54,851 cash. But the following year Elder would hate everything WSOP after breaking his leg in a game of soccer during the downtime between poker action. A lack of insurance plunging Elder deep into his pockets to fix himself up and a Main Event experience of pain followed.

“I was full of medicine and all over the place,” said Elder.

It’s been a mixed bag of results for Elder in 2013. He had a pretty downtrodden experience in the Bahamas at the beginning of the year, but more than made up for it with victory in the first event of the Aussie Millions for $263,925.

“It was like one of these WSOP events. It was fast, the field was soft and it was great fun.”

Winning such a big score in January must take a huge weight of the mind of any professional poker player. So I asked Elder just how much money he needs to live life in the poker circus? As is the case with most people I ask he wasn’t sure…or wasn’t telling.”

“I haven’t really thought about that. Plenty I guess. The traveling and the hotel costs add up; eating at nice restaurants and drinking does also, and then you have your buy-ins.”

The Spring Championship Of Online Poker (SCOOP) was something he would rather forget, and despite only cashing three times in the WSOP he did have pieces of David Vamplew who cashed for close to $900k. But things are on the up for Elder. He is an IveyPoker pro and the recent launch of the beta site on Facebook means the paychecks should start rolling anytime soon.

“IveyPoker has launched on Facebook. It’s good software and lots of fun, “said Elder, “Initially it’s going to be a play money site – a bit like Zynga but with better branding – then there is going to be a real money site and training videos from the likes of Phil Ivey and the rest of the team.”

Two years on from that magnificent victory in San Remo, how does Elder believe his live game has developed?

“At the time I had a pretty gung-ho attitude. I guess I was more fearless back then”, said Elder. “The players were worse, so you could take of advantage of them more. In the last year and a half players have gotten better so you have to play tighter.”

Shortly after the interview Elder crashed out of Event #60: $1,500 No-Limit Hold’em in 125th place for his third cash of the series, but is as likely as anyone to have a deep run in the Main Event if he can keep away from the football field.