WSOP Recap: One Less Bucket List Item For Ken Lind & Steinberg and Hagerling Reach The Final of the Mixed Max

When Ken Lind sat in his armchair and thoughtfully wrote out his bucket list, some 6-7 years ago, he wrote an entry that said: ‘To play at the World Series of Poker (WSOP) in Las Vegas.’ 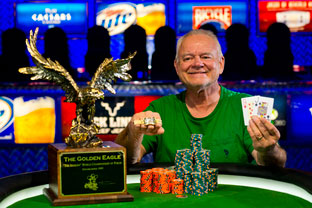 Life moved on and Lind diverted his attention to more important matters, before his wife told him that it was high time that he headed to the desert before he started pushing up grass.

Lind took his wife’s advice and was one of the 4,407-players who entered Event #26: $1,000 Seniors Event No-Limit Hold’em (NLHE) Championship, and you never guess what? He only went and won the thing!

This victory has enabled Lind to scratch a further two items off his bucket list as he vowed to use the $634,809 first-prize to pay off the mortgages on the two homes that he owns.

“My strategy was pretty simple,” Lind told PokerNews sideline reporter Sarah Grant after his win. “Bet when I’ve got something and fold when I don’t.”

And that’s exactly what he did, when during hand #224 of the final table, Lind flopped the nut straight on a [Td] [8c] [7c] board at the same time Otto had flopped bottom set. There’s no getting away from that scenario in heads-up play and Otto had to settle for second place and $390,601.

Steinberg and Hagerling Will Duke it Out for Gold

Event #27: $3,000 NLHE (Mixed Max) has reached its grand finale and the in-form Max Steinberg takes on Isaac Hagerling for the right to be crowned the best player of the NLHE format. Steinberg – who won a WSOP bracelet in 2012 – is coming off the back of a runner-up spot at the WSOP National Championships and a seventh place finish in Event #9: $3,000 NLHE Shootout.

He reached the final after powering his way through David James; the overnight chip leader Brandon Cantu and his semi-final opponent Jason Koon; whilst in the other side of the draw Hagerling disposed of Markus Gonsalves, the talented Ukrainian Yevgeniy Timoshenko – in a three and a half hour marathon – and the former Octo-Niner Jeremy Ausmus to also reach the final destination.

WSOP Gold for the Land of the Rising Sun?

The WSOP has winners from many countries, but Japan only joined that list in 2012 after Naoya Kihara won the $5,000 Pot-Limit Omaha (PLO) Six-Max event. That number could rise to two if Masayuki Nagat can maintain his momentum in Event #28: $1,500 NLHE, where he finished top of a Day Two pile with just 16-players remaining. The 73-year old veteran TJ Cloutier also remains in the field.

The Canadian, Greg Mueller, leads the final 28-players in Event #29: $5,000 H.O.RS.E. 151-players started the second day of action and only 28 will return to play it out for the title of best all-rounder. The three-time WSOP bracelet holder has already made one final table at this years series with a third place finish in Event #8: $2,500 Eight Game Mix. So he’ll have his fingers crossed that he will be able to get a few places closer to that first place berth when play resumes. David Benyamine, David Bach, Marcel Luske and Gus Hansen are just a few of the players who will be trying desperately to stop him.