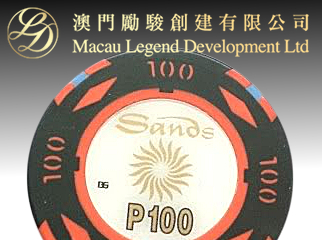 Macau’s restrictive cap on its number of gaming tables is no secret, but financial paperwork filed by casino operator Macau Legend Development Ltd. suggests the local government may also be planning a cap on the number of gaming chips in circulation. Macau Legend, which operates the Babylon Casino in Macau Fisherman’s Wharf and the Pharaoh’s Palace Casino in the Landmark Macau hotel under a sub-concession of SJM Holdings’ casino license, is planning an initial public offering on the Hong Kong Stock Exchange. Macau Legend hopes to raise HKD 6.11b (US $787m) when shares begin trading on June 27.

Nestled within the ‘risk factors’ section of Macau Legend’s 480-page prospectus is a statement that the chips in use at its casinos are supplied by SJM. “If the Macau government caps the total number of chips issuable or in circulation, SJM may not be able or willing to supply the casinos with an adequate number of chips, which could adversely impact our gaming services business.” SJM’s concession contract with the Macau government states the “quantity issued and in circulation of casino chips shall be subject to the approval of the government.”

Macau’s casinos have developed some ingenious technological ways of circumventing the table cap, but a chip cap may be a horse of a different color. Macquarie Securities’ analyst Gary Pinge told Macau Business Daily that “capping the money supply … or putting a restriction on the money supply growth rate … will obviously have an impact on gaming growth.” IGamiX Management & Consulting Ltd.’s Ben Lee said the government had already been sending signals to junket operators regarding “possible market cooling measures” but seeing it in print “solidifies that risk.”

Lee suggested the cap would be aimed at the VIP market by restricting the amount of rolling chips in circulation, giving the authorities a tool with which to control the amount of gaming revenue generated. However, Lee cautioned that the introduction of such a tool would likely drive “an even greater volume of business under the table into side betting than is already the case.”

MACAU CASINOS’ GROWING POLITICAL CLOUT
Then again, perhaps Macau’s casino operators will be able to talk the government out of such a plan. Earlier this month, a seminar at the Macao Polytechnic Institute heard that the Macau economy’s increasing reliance on its gaming sector has given casino operators increased political clout. Macau Daily Times quoted Professor Li-Jun Chen of Guangzhou’s Sun Yat-sen University saying the huge sums invested in Macau by casino operators gives them a lot of leverage. “If the government doesn’t give them benefits or meets their needs, they can invest less or simply not invest at all.”

There are other, more direct methods at casino operators’ disposal. Li-Jun Chen illustrated this point by noting that SJM had successfully elected one of their own to the Legislative Assembly simply “by securing their employees’ votes, for which the workers were given better remuneration and benefits.” Li-Jun Chen suggested other operators might follow SJM’s lead, although in the absence of universal suffrage for the election of all lawmakers, the casinos can’t stack the Assembly to achieve majority control. Yet.