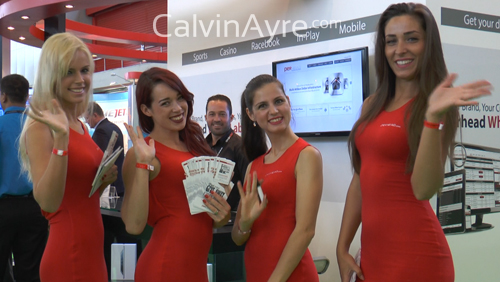 The RAI Amsterdam has become the new home for the iGaming SUPER Show, the largest annual conference dedicated to the online gambling industry.  The conference floor today was buzzing with record numbers, four separate conference tracks were set up at each corner and there were dozens of affiliate program and supplier booths to check out in between. Don’t forget all of our daily summaries and checkout iGaming in Holland and iGSS Day 2.

Just about everyone loves the move from Dublin to Amsterdam, although the online gambling dinosaurs miss the central location of Dam Square and the infamous Krasnapolsky hotel.  Thankfully that itch will get scratched tomorrow night as the Official Party will be kicking off at the Europub and Majestic Bar, our former CAC watering holes, smack in the middle of Dam Square.

There were a number of affiliates and affiliate programs in attendance today and the Amsterdam Affiliate Conference track was busy as expected, especially during the SEO related sessions.

Mike Litson of Blueclaw spoke on the characteristics of China’s search engine Baidu and Weibo, China’s “gamefied Twitter”.  Liston explained that Baidu will absolutely not rank any pages that are online gambling specific, but they will allow FOREX, so focusing on this channel at first may be a good strategy for online gambling operators who want Chinese traffic.

If there is any uncertainty about getting accepted into Baidu, Litson recommends working with one of the two major Baidu set up companies in Hong Kong before pumping money and time into development.  Seeking guidance on how to make content “Baidu friendly” is something that Litson stressed throughout his presentation, especially considering that the search engine is very different than Google.  Some tips for Baidu users shared by Litson include:

*quantity of links are equally, if not more important, than quantity

*no real penalty for spammy links

*get Chinese hosting if you can

He also emphasized the power of Weibo which actually drives real traffic that converts, unlike Western social media such as Twitter that acts as more of a retention tool.  “Weibo is your platform for gambling- people will go to Weibo and they will convert”, he said.  Just beware that an account related to online gambling can and likely will get shut down eventually, but there is nothing stopping anyone from opening up a new one.

Matteo Monari of BizUp presented to the affiliate audience on link building and other SEO techniques.  An interesting topic he touched on was how social factors can impact SEO ranking- for example, an article that is written and then shared and liked throughout social media will receive a boost in ranking, although it will likely be temporary as the sharing and liking will slow down as the article gets older.

According to Monari, there’s a lot happening in the social factor space and eventually Google will seek out exactly who is liking and sharing content, so for example, if a famous physician is sharing something the weight of that share will be higher than if was just your average Joe sharing.

Over at the iGaming Executive Conference, an invite only VIP event for a C-level crowd, Michael Caselli interviewed Frank Fahrenkopf about his 18 years with the American Gaming Association (AGA).  Fahrenkopf shared that the biggest change in the industry over those 18 years is the public perception of gambling and that political elected officials are no longer afraid to face the issue.

When it comes to federal regulation, Fahrenkopf stands by his prediction that it will happen but its just a question of when.  He believes a federal bill would address the 1% of the population that are problem gamblers, in addition to addressing the commerce clause and the thorny issue of Native American tribes and their indigenous rights.

Fahrenkopf touched on the “patchwork quilt” that state by state regulation will bring about and emphasized that he is not concerned about Nevada and New Jersey’s regulations as they’ve been in the gambling regulation space since 1933 and 1978 respectively; who he is most concerned for are those states who don’t have any gambling experience at all.

Next door at the iGaming 4 Business conference, 40 year gambling industry vet John Acres spoke on how entertainment should be at the core of the gambling industry.  “You are not in the money business, you are in the emotion business”, he said.

Acres explained that gamblers want to be recognized and greeted by name, they want to be asked how they are doing and how their grandchildren are. They like feeling good about themselves.  It feels good to take a risk, it feels good to win.  This is just pure human nature.

The challenge the gambling industry faces now is that although human nature has not changed, younger people want different things than what the older generation wanted.  Due to tight regulations for land based casinos in America, its difficult to make any innovations and changes to the games offered, but Acres is hopeful that the entrée of the online gambling into the country will provide a platform to revive the gambling industry as a whole.