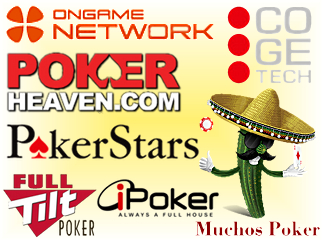 Italian gaming operator Cogetech SpA, a subsidiary of Italian betting giant SNAI, has inked a deal with Canada’s Amaya Gaming Group to use the Ongame poker network on its new IZIPoker.it site, which went live on May 4. Amaya CEO David Baazov called the deal “an important achievement for us in a key market.”

Merge Gaming skin Optimus Poker shut its doors on May 8. A notice posted to the site indicated that its operators had “recently transferred to Merge Gaming Limited certain assets which form part of the OptimusPoker brand. As a result, OptimusPoker will cease to operate OptimusPoker.eu.” The notice reassured its former players that “player funds are secure; and you will have access to your funds and the ability to play on the Merge Gaming Network. All player funds will continue to be managed by Merge Gaming in the usual course.”

Playtech has barred affiliate Muchos Poker from accessing the iPoker Network. Muchos Poker – which acts as a central cashier that allows players to move funds between accounts on different networks – has informed its customers that their funds are secure. While Muchos said it would “respect iPoker’s decision,” it believes it has “done nothing untoward.” It’s been suggested that the decision was prompted by the temporary locking of accounts on iPoker skin Winner Poker (a Muchos Poker client) due to what an iPoker spokesperson called “security concerns.” That move came one week after iPoker announced the suspension of all player-to-player transfers on the network.

Full Tilt Poker’s pioneering fast-fold poker product Rush Poker experienced a mobile rebirth earlier this month, although the HTML 5 app is at present available only on Apple’s iOS platform. FTP spox Shyam Marcus posted a message on the 2+2 forum describing the app as a “fairly temporary solution” but acknowledged that a more permanent version for both iOS and Android was “still a good number of months off.”

Meanwhile, FTP’s new owners PokerStars are building an online museum to, er, themselves. Michael Josem announced the news via the company blog, requesting that Stars’ “over fifty million players” submit notable stories from the poker site’s history, “especially if you have any images, video or other media” such as “a screenshot of an interesting hand.” Barring that, the site is also seeking stories of “some notable service that you received, or a friendship that developed from the tables.” Anyone with such material is urged to contact [email protected]