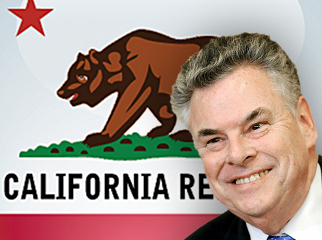 Fogarty declined to offer any specifics on the bill’s details, but Politico’s sources claim the bill will be less “Nevada-centric” than the bill crafted (but never introduced) by Senate Majority Leader Harry Reid (D-NV) in 2012. King’s poker-only bill will reportedly include carve-outs to appease state lotteries, which had expressed vehement opposition to Reid’s phantom bill.

CALIFORNIA, HERE WE COME
King’s bill may or may not precede the one currently in the works in California, the mother of all online poker liquidity states. Speaking at this year’s GIGSE conference in San Francisco, tribal gaming stalwart Victor Rocha told QuadJacks.com host Marco Valerio that a new online gambling bill would be introduced by June, and unlike previous efforts, this one would have near-unanimous tribal support, including tribes “who have been consistently against” online gambling.

Rocha said he hadn’t read the bill’s language, but the people writing it had described the bill as “very inclusive” in that it addressed concerns by stakeholders, including the state’s card clubs and horseracing interests. However, ‘inclusive’ apparently won’t include operators that continued to serve US punters post-UIGEA, as Rocha said the new bill would contain strict ‘bad actor’ language.

Rocha told Valerio that the new tribal bill would be “completely separate” from the SB 678 placeholder bill filed earlier this year by state Sen. Lou Correa. However, the window for introducing new bills for California’s current legislative session has closed. On Sunday, the Sacramento Bee reported that the San Manuel Band of Mission Indians was circulating a 53-page long working draft of the amended SB 678. California gaming attorney Harsh P. Parikh (@CAGamingLawyer) tweeted a snapshot of some of these amendments, which include limiting the bill to poker-only with a 10% tax on gross gaming revenue.

ILLINOIS, MASSACHUSETTS SETBACKS
As expected, Illinois state senators passed their state’s SB 1739 gambling expansion legislation on Wednesday, but only after scrubbing the bill’s online gambling language. Senate President John Cullerton has hinted that online gambling will be introduced as a standalone bill, although the current legislative session ends May 31, which doesn’t leave much time to line up support, but the bill could reappear in the legislature’s ‘veto session’ in the fall. In the meantime, SB 1739, which would allow five more brick-and-mortar casinos (including one in metro Chicago) and add slots to racetracks, heads to the House for consideration.

Massachusetts legislators have also crushed their state’s flickering online gambling hopes. An online gambling amendment had been added to the state budget, but said amendment was absent from the budget’s final text when it was approved last week. See you next year.