Ludovic Lacay is one of the most popular faces on the European Poker scene. He first grabbed the poker world by the scruff of the neck and said, ‘look at me,’ back in 2007 when he finished as runner-up in the World Poker Tour (WPT) Spanish Championships. Mike Sexton was commentating on that final table and called the young Frenchman crazy. The pair were seated side-by-side as the day came to a close at WPT Venice yesterday, and I am sure that Sexton will be one of the first to admit that Lacay has a much more balanced crazy playing style these days.

That victory – of sorts – for Lacay back in 2007 drew the attention of one of French Pokers biggest sponsors Winamax. 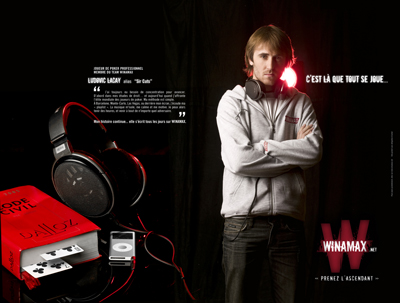 “I am really lucky to represent the Winamax brand. It’s a really dynamic poker site and they work really close to the French poker community.”

“I am really lucky to represent the Winamax brand. It’s a really dynamic poker site and they work really close to the French poker community.”

“They are killing the sports betting market in France. The poker too suffers because of the taxes. For years the government said that poker was a game of luck, like other casino games, but two years ago they changed their view. They now believe it’s a game of skill and they are after five years worth of winnings and 100% of penalties. In essence they want 90% of everything you have earned.”

Many of the French poker players have left their country of origin because they can’t make a profit in the current heavily taxed environment.

“Poker players leave the country, meaning they don’t pay taxes in France and also take money out of the French economy, so where’s the sense in that?”

French poker has had its image tainted just recently when news broke of the potential cheating scandal at the Partouche Poker Tour, involving Jean-Paul Pasqualini and Cedric Rossi. What was Lacay’s view on the allegations?

“I was one of the first to come out and say that the allegations were probably true. But I am more concerned with preventing further instances of cheating. I am sure I am being cheated on times, even today, so there needs to be more prevention brought into poker.”