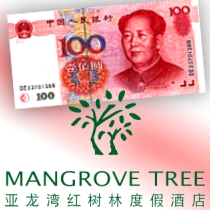 Is Macau’s status as the sole Chinese jurisdiction in which casino gambling is permitted in jeopardy? Macau has reaped phenomenal financial benefits from this policy, but it could soon find its monopoly status under threat by the island province of Hainan. Hainan is the largest of China’s special economic zones and recently played host to the World Poker Tour National China at the casino-free MGM Grand Sanya resort. As gambling isn’t permitted in Hainan, the WPT organizers were only able to stage the tournament after the authorities agreed to classify it as a sporting event in which the event sponsors provided the players’ buy-ins. But the times may be a-changin’.

In addition to MGM’s joint, the area is host to the new Mangrove Tree Resort World Sanya Bay, which will offer over 4k hotel rooms when it’s completed next year. It already offers a ‘casino bar’ named Jesters, in which 50 gaming tables cater exclusively to the resort’s guests. Once inside Jesters, players can purchase tickets for RMB 500 (US $80) with which to place wagers ranging from RMB 20-2k at the mass tables or RMB 2k-100k at the VIP tables. A special VIP room is under construction on Jesters’ second floor in which high-rollers will be able to wager over RMB 100k ($16k) per hand.

The catch is that all winnings are paid in ‘Mangrove points,’ which can only be redeemed at the casino for products such as iPads, luggage or artwork from Mangrove owner Zhang Baoquan’s Beijing gallery. Next year the resort plans to open 20 luxury retail outlets – including Louis Vuitton and Prada – at which these points will also be redeemable. The system is akin to the prize-redemption system in Japan’s pachinko parlors and raises the possibility that a shadow economy will develop similar to that in Japan, where off-premises third-parties agree to redeem the little silver pachinko balls for cold hard cash instead of prizes.

Zhang told Reuters that the Chinese government was “monitoring” his casino bar experiment as “a test.” Zhang said the government wasn’t quite ready to authorize full-fledged gambling outside of Macau, “but my personal opinion is, in future, there is a big possibility that they will.” With an eye towards that future, Zhang is developing 10 such resorts around China, all the way from Tibet to Qingdao in Shandong province across the Yellow Sea from South Korea. Caesars Entertainment is also in the process of constructing a resort in Hainan, meaning for once in their unlucky lives they may actually be ahead of the Asian curve.