Home / Business / PlatinumSB back in business; C-290 sports bet bill on the ropes in Canadian Senate 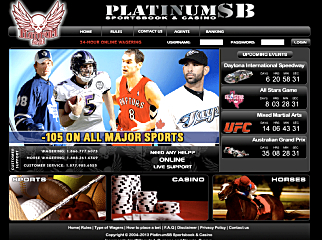 PlatinumSB, the Canadian online credit-betting sportsbook whose invite-only Super Bowl party was the subject of a dramatic bust during last Sunday’s game, is proving harder to kill than Canadian law enforcement agencies first envisioned. While the authorities arrested several individuals – including some Hell’s Angels members – in the Greater Toronto Area and convinced the Internet Corporation for Assigned Names and Numbers (ICANN) to seize the PlatinumSB.com domain, the site has resurfaced online at PlatinumSB.tk. The .tk domain belongs to Tokelau, a non self-governing territory off the coast of New Zealand.

A source who wished to remain anonymous told the National Post that the site had switched to the new domain within hours of the shutdown, even retaining customers’ old account numbers. “Nothing has changed. Police are making a fool of themselves. This book will never be shut down.” The Tokelau domains were registered in 2004, suggesting the group operating the sportsbook had long since worked out a contingency plan for just such a scenario. Police also seized the domain of PlatinumSB’s sister site, Betwho.com, which has also resurfaced as a .tk site. A Royal Canadian Mounted Police spokesman said their investigation was ongoing and “there may well be further charges and action … We will be looking to determine if any of the previously arrested individuals are behind this new site.”

The authorities have done their best to paint PlatinumSB’s operators as something out of Murder Inc., and even the Post’s source said he chose to remain anonymous because he didn’t want “the Mafia blowing my house up.” However, the source also described most of the agents handling the money on the ground for the sportsbook as “gentlemen, smart guys. The part where the business starts to get dangerous is when you have guys who don’t pay.” As for the book’s customers, the source described them as “not bad people … just regular guys with families who just want to have a little fun.”

WILL C-290 DIE FROM NEGLECT?
While police play whack-a-mole with PlatinumSB’s domains, Canada’s Senate returned from its winter break on Monday, and their first week of work went by with nary a word about the C-290 sports betting bill that’s awaiting a final vote in the Upper Chamber. Counting the final few days before the Senate adjourned for the holidays, it has now been eight sitting days since C-290 was last discussed in the Senate. Should 15 sitting days elapse without the bill coming up for further debate, C-290 would be dropped from the Order Paper. Despite passing through the Commons without so much as a peep of protest, the traditionally rubberstamp Senate has shown a rare streak of independence by obstructing C-290’s passage. Last month, before the Senate returned to duty, Liberal Senator Joe Day said he expected the majority Conservatives would let C-290 “die a natural death.”

AND THE WINNING OSCAR BET GOES TO…
In the meantime, another provincial lottery outfit is following the Atlantic Lottery Corporation’s lead by offering non-sporting prop wagers. The ALC announced earlier this month that it would offer prop bets on the Academy Awards, and Loto-Québec has since followed suit. Spokesman Jean-Pierre Roy told CJAD.com that novelty props were “a brand new avenue for us.” Roy said the site didn’t expect to make a fortune from Oscar props, but should interest prove strong, “we may offer more of this kind of betting down the line.” But Roy told the Canadian Press that Loto-Québec doesn’t expect to match the variety of props offered by UK online betting sites. “We’re not there. We’ll start with the main categories and go from there.”