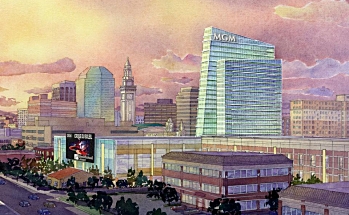 MGM Resorts International is so hell bent on securing that one casino license in Western Massachusetts that they’ve effectively put the full court press on the city council with an elaborate and might we say, grandiose plan that will focus on “downtown revitalization”. Talk about singing sweet music to the ears of the city’s residents.

The plans were unveiled by MGM vice president of global gaming development Michael Mathis during a council meeting with the Indian Orchard Citizen Council earlier this week. A big chunk of MGM’s focus if it gets the license is to rehabilitate a section of downtown Springfield that hasn’t recovered from the effects of a 2011 tornado that left that section of the city in tatters. But now, MGM has expressed its intention of spearheading any and all efforts of restoring   that part of the city’s character, a move that looks to have been made to ingratiate themselves to the residents of the city.

As part of their efforts, Mathis said MGM is proposing a number of ways by which the city can benefit from having the global casino operator in the community with jobs and increased tax revenue on top of that list. MGM’s proposal calls for the hiring of 2,000 construction jobs and 3,000 direct jobs for the project. Likewise, the casino operator will also include creating retail, dining, and entertainment establishments inside the casino development, as well as in other parts of the city, and a goal of creating and providing unionized hospitality service jobs.

“We are not just a casino company,” Mathis said. “We are a hospitality company.”

Meanwhile, Penn National Gaming, MGM’s chief rival in the battle for the one casino slot in Western Massachusetts, is expected to use its own charming and disarming tactics when it makes its pitch to city counsel soon. For now, though, MGM Resorts has taken the bull by the proverbial horns and is already at work trying to convince the city counsel of their thorough and impressive proposal.

While the major gaming companies have pretty much laid out their proposals in Massachusetts, two late applicants – PPE Casino Resorts and Mass Gaming & Entertainment – are still without a proposal with no indications on whether they’re planning to seek a license for a slots parlor or a resort-style casino. Both companies did submit their initial applications and paid the non-refundable $400,000 application to the Massachusetts Gaming Commission, so we can at least expect an update from these folks some time soon. We can be patient about it, but the MGC might not be so much, particularly after Gayle Cameron, one of the five gaming commissioners, stressed the importance of the direction both companies are going to in order for the commission to be acutely aware of who’s applying for a casino-resort license or who’s applying for a slots parlor license.