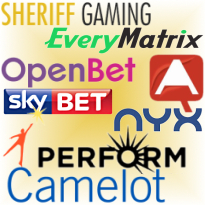 Just days after National Lottery operator Camelot learned it had won its bid to manage the Pennsylvania Lottery, Camelot has announced National Lottery tickets will double in price. Starting this fall, it will cost £2 to play; the first price hike since 1994. The prize for matching three numbers is rising from £10 to £25, and four numbers will now get you £100 instead of £60. However, the prize for matching five numbers has been cut by a third to £1k, while five numbers plus bonus has been halved to £50k. The average Sunday jackpot will rise from £4.1m to £5m, and Wednesday’s big whoop goes from £2.2m to £2.5m. Despite the plethora of gaming options, 60% of UK adults play the Lotto, and overall UK lottery sales have gone up 35% over the past decade.

Online gambling platform provider AliQuantum Gaming (AQG) will add NYX Interactive’s Open Gaming System (OGS) titles to its suite of gaming options. David Flynn, CEO of the Stockholm-based NYX is stoked to provide Flash and mobile casino games to the Malta-licensed AQG. Flynn says he’s “delighted” to be joined at AQG’s hip, while AQG CEO Andy Jones called it an “obvious” hookup that had left his clients “extremely pleased with the new content.”

UK operator Sky Bet has renewed its technology deal with OpenBet for another three years. The relationship dates back to 2003 and OpenBet will go on supplying Sky Bet, Sky Vegas and Sky Poker with online sportsbook, casino and poker technology – software, content, support and maintenance – until 2016. Sky Betting and Gaming managing director Richard Flint says OpenBet played a “massive role” in their success and OpenBet CEO David Loveday says his company has “enjoyed being an integral part” of Sky Bet’s growth.