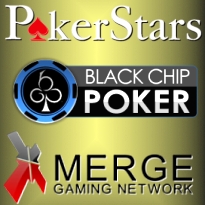 Black Chip Poker (BCP) has confirmed long-swirling rumors that it was on the move by announcing it will leave the Merge Gaming Network for the Winning Poker Network (WPN), effective Dec. 3. BCP player account balances will be transferred to WPN on ‘moving day’ and will be accessible the following day. WPN will “take full responsibility” for said balances, and once the transfer has been made, “neither Merge nor [Merge regulator] the Kahnawake Gaming Commission will have further liability” for those accounts. BCP players’ poker clients will “seamlessly upgrade” to WPN once they close on Merge, that is, unless you use Apple computers, as WPN lacks a Mac-friendly poker client. It will be “business as usual” for BCP affiliates, whose links will dynamically update.

BCP’s announcement came a couple days after it abruptly cancelled plans to participate in Merge’s marquee Poker Maximus III event. Now two more prominent Merge skins – RPM Poker and Hero Poker – have also bowed out, on the very day that PM3 kicked off. Hero Poker hasn’t yet commented on its decision, and RPM rep ‘RPMSeth’ would only tell poker forum 2+2 the company was sorry for any inconvenience caused and hoped “to have more information available in the near future.” Scuttlebutt has it that the skins were concerned that PM3 could run a hefty overlay, a burden that the skins would be expected to help shoulder. Merge has of late been the subject of a flurry of seemingly negative news, including the departure of its CEO in September, the elimination of higher-stakes tables and October’s controversial decision to ban P2P transfers. Merge’s biggest skin Carbon Poker switched to a different cashier last month, and two Carbon sister sites – Aced and PDC Poker – made a similar switch on Saturday.

Let’s end on an ‘up’ note, shall we? PokerStars dealt its 90 billionth hand on Thursday. The milestone came just seven months after the 80b mark and less than three years since it topped a mere 40b. (For further perspective, it took nine years to reach the 25b mark.) The Spanish player who played hand #80b won $23k for being in the right seat at the right time, while ‘m!sspiggy’ took home over $66k as (we assume) her reward for making the history books. The other five players at m1sspiggy’s table split a further $162k.