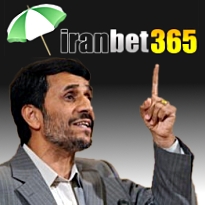 UK wagering outfit Bet365 has decided to cut off access to its Iranbet365.com site from bettors in Iran, according to a notice published on the site earlier this month. All Iran-based accounts will be closed on Nov. 26 in order to comply with new European Union restrictions on companies doing business with the Islamic Republic. Bet365 used to have local representatives on the ground in Iran, making them a popular online destination for Iranian sports bettors, but the company severed those ties recently and the site is now officially blocked by Iran’s web censors. (All gambling in Iran is considered haram, but like most religious laws, there are ways to get around such edicts.)

Bet365’s notice expressed regret over the decision, and promised to return the moment the economic embargo is lifted. In the meantime, Bet365 will continue to accept wagers on local sporting events for the benefit of Iranian ex-pats. It’s worth noting that Bet365’s chief execs were signatories to the letter sent this week to the European Commission protesting the lack of EC action against EU member states whose gambling laws are said to run counter to EC guidelines. By observing the anti-Iran sanctions, Bet365 could be said to be demonstrating support for the EU’s wishes, leaving them free to say, ‘hey, EC, where’s the reciprocal love?’

Bet365 might no longer be number one in Iran, but they continue to rule the latest Gambling Data In-Play Tracker (IPT) benchmark. The IPT monitored the in-play betting offerings at 11 leading online sportsbooks during specific 10-minute intervals in the second half of September, and found Bet365 leading the pack with a total of 778 events offered, the fourth consecutive period in which Bet365 has topped this chart. Ladbrokes was second with 603 events, followed by Bwin’s 567 and William Hill’s 547. Bet365 also offered the largest variety of in-play wagers, covering 23 of the 24 sports tracked by IPT. Ladbrokes was again bridesmaid with coverage of 17 sports, just ahead of Paddy Power’s 16.

Hills led the ‘average markets per event’ stat, with 56.3, over twice Bet365’s average of 27.4. Paddy Power and Ladbrokes weren’t far back, with 25.1 and 24.3 respectively. The return of European football pushed the record for concurrent events from 430 this spring to 693 on Saturday, September 22. Football remains the single most popular in-play sport, capturing 74% of the total in-play market. Ladbrokes led this sector with 474 events on offer, narrowly edging out Bet365’s 466, Bwin’s 426 and Hills’ 419. Tennis was the second most-covered sport at 13%, with basketball and hockey (!) notching 3% apiece. Are there really that many Canadian ex-pats in the UK?