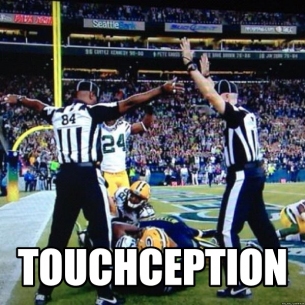 A controversial touchdown call in this week’s Monday Night Football saw more than “$150-250million” in bets shift after the Green Bay Packers failed to cover the spread – with one oddsmaker estimating that a huge $1billion changed hands. ESPN quote Sportsbook.ag’s Mike Perry as stating that “between $200 million and $250 million” swung on the decision at the end of the game and that as much as “70 to 80 percent” had staked money on Packers to cover the spread and beat the Seahawks.

Meanwhile Jeff Sherman, assistant director of the race and sportsbook at the Las Vegas Hotel, estimated the game shifted $15 million in Nevada alone and that 10 times more was likely to have shifted with international sites. That paled into insignificance when compared to Oddsmaker Danny Sheridan’s comments to USA Today, where he stated that a billion could have changed hands on the game.

If you’ve had your head up your ass for the past 24 hours or simply don’t like North America’s form of rugby then here’s how it played out.

The Seattle Seahawks – a 3.5 point underdog – attempted a Hail Mary on their final play of the game. It looked to all intents and purposes that Packers safety M.D. Jennings had intercepted the pass and in that case it would have ended in a 12-7 Packers win – spread covered. That was before the replacement officials got involved – only on duty due to a strike called by the officials that has spilled over into the season. One official called a touchdown and the other a touchback. We wouldn’t have been surprised had another three turned up with one calling a strike, the other showing a red card and the third signalling a safety.

Now in all honesty, when officials make mistakes in big games in the UK all manner of things happen. You can pretty much guarantee that if it involved certain clubs a death threat will be issued by some crazed fanatic and at the very least the official(s) involved will be slandered all over Twitter on all manner of levels.

With the advantage of being able to use instant replay to make decisions there really is no excuse for this kind of an outcome in the NFL and the bookies, although they’re laughing at the amount they’ll have made, would have been irate if the shoe were on the other foot.