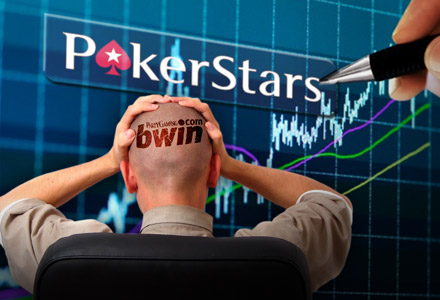 In the aftermath of last week’s announcement that PokerStars would settle fraud charges brought by the US Department of Justice and buy the assets of Full Tilt Poker, much of the media coverage focused on the potential repayment of the estimated $330 million owed by FTP to the players who have seen accounts frozen since last year’s “Black Friday”.

But the PokerStars deal also affected investors in the gambling sector, most notably shareholders in Bwin.party Digital Entertainment (BPTY.L). Bwin.party stock fell nearly 14% from its open on July 31st – before the PokerStars deal was announced – to close the following day at 95.9p, an all-time low for the stock. The decline in share price added insult to injury for Bwin.party, whose PartyPoker platform dominated the US market before its withdrawal after the 2006 passage of the Unlawful Internet Gaming Enforcement Act (UIGEA). Both Stars and FTP remained open to US customers until 2011, becoming the market’s two most dominant players; Reuters last week noted that BPTY executives were “angry that PokerStars was set to cash in on the customer loyalty built up” while PartyGaming (which merged with bwin Interactive Entertainment in 2011) stepped to the sidelines.

The rehabilitation of not one, but two, potentially dominant competitors in the US and European markets was just the latest in a string of bad news for Bwin.party. The stock has lost nearly 40% of its value since early May, as jitters in the broad market, the failure of a proposed sale of subsidiary Ongame Network to Shuffle Master (SHFL), and a disappointing mid-year trading update have all weighed on BPTY’s valuation. Ironically, one of the reasons Bwin.party gave for its disappointing first half was weakness in its poker segment – which the company claimed was driven in part by the launch of Zoom Poker, a fast-fold poker product from none other than PokerStars itself.

In response, bwin.Party has embarked on a cost-cutting program and, in late May, unveiled a new social gaming strategy. But these efforts do not fix the company’s core problem; it is simply not competing successfully in its legacy European markets. Poker revenue fell 7% on a net basis in 2011, and the downbeat tone of the trading update means further declines may have occurred in the first half of 2012. Indeed, analyst David Jennings of Ireland’s Davy projects poker declines of 11.7% for 2012 and another 5% in 2013. Jennings pointed out that Full Tilt would be a “fresh competitor in the European market,” leading to a “structural decline” in bwin.Party’s poker revenue. Indeed, if Jennings’ projections are correct, bwin.Party revenue will fall by 22% from 2010 to 2013; given the fact that in poker, as in markets, “liquidity breeds liquidity,” that fall could be accelerated in the future, as players leave for sites with more players, larger tournaments, and bigger payouts.

Fears about Party’s US potential likely factored into the drop as well. In the days following the late December DOJ opinion re-interpreting the Wire Act, BPTY stock rose by some 30%. Investors clearly felt that the company’s eventual entry into the US market – facilitated by a joint venture with MGM Resorts International (MGM) and Boyd Gaming (BYD), in which Bwin.party is a 65% owner – had to potential to move the stock, or at least create the growth that has been missing in Europe. Indeed, despite PartyPoker’s six-year absence from the US market, its previous dominance – PartyPoker owned more than half the market in 2006 – and cleaner image (among consumers, and, more importantly, regulators) positioned the platform as a serious contender for US market share.

But now, with the DOJ settlement signed and PokerStars given the go-ahead (at least by the feds) to bid for licenses in the US, Party’s US ambitions are in trouble. Given that bwin.Party can’t compete with PokerStars on equal footing in Europe, how can it overcome the dominant market share PokerStars and FTP have created since 2006? The two sites were the clear-cut number one and number two sites in the US market after Party’s exit, and with PokerStars now being treated by the poker community as a conquering hero, and Full Tilt’s crooked management removed, their brands may be even stronger.

In short, with the Stars/DOJ deal, it appears bwin.Party has gone from potential top dog to certain underdog. It is a continuation of a process that has seen once-great PartyGaming lose nearly 95% of its value over the last seven years. The company that helped create and define the poker boom, that was poised to revolutionize online gambling, whose IPO created not one, but three different billionaires, that was worth more than British Airways at its peak, is now just another Internet casino. That’s not going to be enough in what will certainly be a crowded, cutthroat market, particularly if the now-sainted PokerStars can get by state regulators. Knowing that, Bwin.party’s long-term struggles – and the 14% drop in response to the PokerStars news – are hardly surprising. And given the difficult economic backdrop in Europe and the Continent’s complicated regulatory structure – Bwin.party’s trading update noted a €5-10 million charge in the second half due to new German taxes – bwin.Party is still not cheap enough to buy, even after setting a new all-time low on Wednesday.

The PokerStars deal appeared to affect another struggling stock: Zynga (ZNGA), which fell 4.7% in trading the day after the settlement was announced. To be fair, however, it’s hard to tell what in particular is moving Zynga stock downward, since for the last few months, down is pretty much the only direction in which the stock has moved. Zynga has been halved in the last six weeks, largely due to disastrous earnings in late July. The stock is now off over 80% since early March, and 64% since I called it one of the market’s “five dumbest stocks” back in early May.

As I argued back in April, Zynga has little chance to become the online poker powerhouse many of its bulls have projected. In fact, as its legacy social media games see users flee and revenues decline, online gambling seems less like the “natural fit” CEO Mark Pincus claims and more like a desperate attempt to rescue a clearly flailing business. And if anything, the potential re-entry of PokerStars and Full Tilt only serves to emphasize the branding struggles that would face a Zynga-designed poker product. PokerStars and Full Tilt offer six-figure prizes and stables of poker professionals, wearing corporate logos as they make daring bluffs and hold stacks of cash over their heads following televised major tournament wins. Zynga Poker offers play chips, bored housewives, and a red-haired cartoon spokeswoman that looks an awful lot like Jessica Rabbit. Zynga will not compete with PokerStars on branding, does not have the marketing experience in online gambling that PokerStars has, and has shown nothing close to the demanding, detailed technical expertise an iGaming platform requires. With many ZNGA bulls still touting online gambling as Zynga’s potential salvation, the addition of PokerStars to the US market would seem to add yet another reason to be bearish on the stock. Indeed, the fact that news of Facebook’s first foray into real-money gambling did little to move Zynga stock on Tuesday shows that the market is skeptical of Zynga’s real-money future.

Interestingly enough, however, beyond BPTY and ZNGA, the PokerStars/DOJ settlement appeared to have little effect on online gambling stocks. One might think that Caesars Entertainment (CZR), owner of the World Series of Poker brand and a joint online poker venture with 888 Holdings (888.L) aimed at the US market, would see some weakness on the PokerStars news. The stock hardly budged; nor did that of 888, which, as our Steven Stradbrooke noted, fell just 1% on the day. Similarly, MGM and Boyd Gaming – bwin.Party’s joint venture partners – saw little movement in their stocks. This would seem to add credence to the argument I’ve made earlier that the US online poker market will simply not be big enough to change the bull case for high-debt casino operators such as Caesars and MGM.

The other possibility is that the market’s large investors – institutions and hedge funds – simply are putting very little value on the US iGaming market right now. Bwin.party’s drop may have come simply from the effect of a “clean” PokerStars and a rehabilitated Full Tilt providing additional competition in Europe, with little investor attention paid toward the effect in the US. Zynga’s fall may have come simply because Zynga stock is a so-called “falling knife.” And the relative indifference toward the news by holders of other gambling stocks may be explained by the fact that major investors are simply expecting very low profits from a regulated US online poker market.

Either scenario – whether the Stars/FTP combo will create a new, potentially best-of-breed competitor in the US, or if investors are downplaying the profit potential of US iGaming – puts the lie to the dozens of articles written on retail investor-facing websites like Motley Fool or my own Seeking Alpha that regulated online gambling in the US will lead to massive gains in stocks like Zynga, Caesars, and MGM. Those bull cases seem far-fetched before; with the potential addition of PokerStars to the US market, they seem close to impossible at this point.

After all, if the US online poker market is going to be that profitable, then PokerStars looks likely to grab at least a significant chunk of market share, leaving less for its competitors. If PokerStars doesn’t grab share, it means it has been shut out by state regulators, as US iGaming follows the same laborious state-by-state legalization process that has disappointed investors so far. Either way, the idea that Zynga’s collapse can be slowed, or Caesars’ $20 billion debt load eased, by US iGaming seems unrealistic. I’ve argued in the past that, for the industry’s big players, there simply isn’t enough money in the US online gambling market to go around. With PokerStars’ potential re-entry, it looks likely that there will be even less.