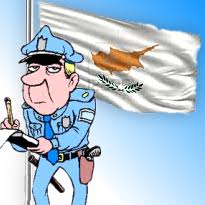 Two weeks after politicians in Cyprus passed legislation banning online gambling other than sports betting and the dull type of inert lottery games offered by Greek betting firm OPAP, police have begun enforcing the new restrictions. On Friday, police raided seven non-OPAP betting shops, resulting in the confiscation of 17 computers, €2,200 in cash and what the Famagusta Gazette referred to as a “large number” of betting slips. Nineteen individuals, including shop staff and punters, have been charged with offenses under the new gambling law, which carry maximum penalties of five years in jail and fines of up to €300k. The police claim this is only the start of their “broad scale operation” to enforce the new edict, and with an estimated 1,000 betting shops doing business on the island, they have their work cut out for them.

Not all of those shops are still doing business, however. AA Crown Bet Ltd., which offered online casino and slot machine services provided by companies based in Ireland, England and Malta, closed its 16 betting shops following passage of the legislation. On Tuesday, attorneys representing AA Crown Bet told the Cyprus Mail that the company was considering suing the government, reporting them to the European Commission (EC) and/or making an appeal to the European Court of Justice (ECJ).

Attorney Yiannos Georgiades pointed out that the ECJ has in the past rebuked Greece for adopting a similar position, i.e. cracking down on some companies on the pretext of protecting consumers while simultaneously promoting gambling participation with other companies (aka OPAP) in which they have a financial stake. “It has to be done according to the principles of proportionality and non-discrimination … [Cyprus allows] OPAP to operate providing similar services while specifically prohibiting online casinos and slot machines. [OPAP] offer random number games, games of chance which are very similar … It is not justified.”

Perhaps not surprising for a country looking to the EU for financial bailouts, Cyprus doesn’t seem to get how its economy works. Georgiades noted that each betting shop employed an average of five to ten people. “A lot of people are losing their jobs, not just my clients.” Georgiades also brought up a legal opinion issued a few years back by the country’s Attorney General, who stated that Cyprus had to respect cross-border agreements between EU member states. This led to companies setting up operations in Cyprus, but now these same companies “have lost their investments.” Online gambling companies, including Betfair, which was particularly affected by the legislation’s explicit ban on betting exchanges, have announced they are also considering their legal options regarding the legislation.