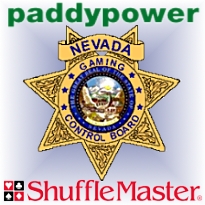 The Irish were up first, seeking a preliminary finding of suitability for both the company and its key execs. As live-tweeted by the Las Vegas Review-Journal’s Howard Stutz, Paddy CEO Patrick Kennedy touted his company as the number one legal bookmaker in the UK, Canada and Australia. (Stutz also tweeted a photo of the hearing, but sadly, it doesn’t show whether Kennedy had his fingers crossed while he made that statement.) Kennedy also took pains to point out that his company had never accepted online wagers from US punters. While they don’t actually have any business lined up in the state, the Irish Times says the Paddsters do have a biz dev team on the ground, and Kennedy told the GCB panel that the US was a “key potential market” for the company. Following the GCB’s suitability thumbs-up, Paddy’s case will proceed to a Nevada Gaming Commission (NGC) hearing on July 26.

Shuffle Master’s bid for an interactive gaming service provider license also made the GCB grade. Shuffle Master detailed its immediate plans to port freeplay versions of its popular game titles – including Three Card Poker, Caribbean Stud Poker and Ultimate Texas Hold’em – from the casino floor to laptop and mobile screens, then to port those social gamers back to the casino floor where they can become real money gamblers on familiar games. Shuffle Master doesn’t currently have any existing real-money online poker business pending in the state, having walked away from its planned acquisition of Bwin.party’s surplus online poker network Ongame last month. Like Paddy, Shuffle Master’s ultimate fate will be decided later this month by the NGC.