Day 1b of the World Series of Poker Main Event took hold of the Rio on Sunday with almost double the amount of players of the first day – 2,114 – putting up the required $10k buy-in. John Hoang is out in front on 180k chips and it puts him in second place overall behind day 1a leader William John (266.7k). Lagging close behind Hoang is James Schafer (171.25k) and Vanessa Selbst kept up her excellent tournament form by taking third on the day, and fourth overall, with a stack of 168,350.

Any day at the WSOP is nothing without its casualties and day 1b of the Main Event was no different. Former Main Event champ Grey Raymer headed the list with Tom Dwan, Yevgeny Timoshenko, Victor Ramdin, Joe Sebok, Todd Brunson and Bertrand Grospellier also out. Another to hit the dust on the second day was UFC Welterweight champion Georges St-Pierre, who was introduced to the room at the start of the day by organizer Jack Effel as he performed the “Shuffle up and deal”. St-Pierre was eventually knocked out by Dutch Main Event debutant Stephen Patz, who admitted to Vin Narayanan at Casino City Times that he “knocked out the UFC guy”. 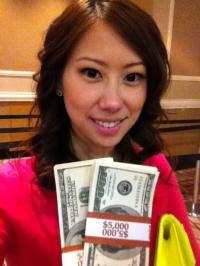 As for those still in the running, four-time bracelet winner Daniel Negreanu has a fighting chance and ended up in the top ten with a stack of 140,575. Liv Boeree, Jerry Yang, Dan Harrington, Eugene Katchalov, Brian Hastings, Shaun Deeb, Barny Boatman, Neil Channing, David ODB Baker and former WSOP Main Event champ Peter Eastgate all return on day 2 this Tuesday.

Darvin Moon was another to make the event’s second day and he celebrated by giving Epic Poker frontman Jeffrey Pollack both barrels, after Moon had signed as an ambassador with HPT. He told Poker Listings: “The whole crew were like a big family and Jeffrey [Pollack] had to go and f***ed it all up for them. He’s a douchbag but that’s a part of life.”

Tomorrow, look out for Bodog pro Jay Tan, who takes her first steps into the WSOP Main Event. She tweeted earlier: “Bought into my 1st ever #WSOPmainevent woo $10,000 USD thx @Bodog pavilion yellow table 282 gogogo pic.twitter.com/lWTiQt7a”. We wish her all the best and hopefully she’ll be able to join the catsuit-donning CalvinAyre.com reporter Tatjana Pasalic on day two.