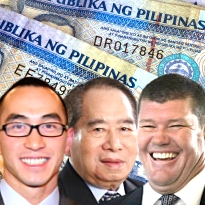 Macau casino operator Melco Crown Entertainment Ltd. and Philippine property and leisure firm Belle Corp have taken their plans to partner on a resort casino in Manila to the next level, signing a conditional memorandum of agreement to invest up to $1b in the project. On Thursday, the companies announced a finalized agreement was in the works and should be ready within the next two months. Melco Crown – the joint venture between Aussie tycoon James Packer’s Crown Ltd. and Lawrence Ho’s Hong Kong-based Melco International Development Ltd. – will handle the deal via a subsidiary, MPEL Projects Ltd. Belle Corp, which is run by Henry Sy, the wealthiest man in the Philippines, will jointly develop and manage the proposed 100-hectare property with MPEL and two other Henry Sy firms: SM Group and PremiumLeisure and Amusement.

Belle was already working on its Manila hotel/casino – the Belle Grande Manila Bay in the Philippine Amusement and Gaming Corporation’s (Pagcor) Entertainment City – but the project had stalled while deal negotiations dragged on, putting its Q1 2013 opening target in jeopardy. Seeking to outsource casino management services, Belle had partnered with local company Leisure & Resorts World Corp (LRWC), which operates bingo and other interactive games in the Cagayan Economic Zone Authority. Rappler.com reported that LRWC would assume an equity capital position in the new venture.

The Belle/Melco deal is contingent upon the project site being registered as a tourism economic zone by the Philippine Economic Zone Authority, a designation that provides certain tax incentives. Pagcor will require an initial allocation of $650m for the project. Melco has promised to invest a maximum of $580m via cash, cash flow and debt financing. A loan facility may contribute $320m of this sum. In announcing the deal, Melco stated that “the expansion into new jurisdictions where the company expects strong returns on capital will further diversify the company’s exposure in Asia.”