Home / Business / Who will Asian police harass now that Euro 2012 is over? 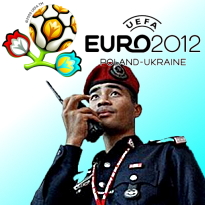 With another European Championship in the books, it’s time for one last tribute to bookmakers across Asia who risked life and limb to provide punters with their footie betting needs. While most critics point out the financial rewards of such endeavors, few focus on the inherent dangers. Profiling a “foot-soldier” discreetly taking bets from his seat in a coffee shop in Singapore, the Taipei Times related how such activities are routinely punished by both jail time and “the dreaded cane, which flays flesh from the buttocks and leaves prisoners unable to sit down.” Despite this cheeky challenge, a single “well-known café” reportedly featured up to six groups of runners in action simultaneously, each taking in S12k-13k (US$9.4k-10.2k) per day of Euro 2012, from which their cut amounts to S2k-3k. Asked why the locals don’t avail themselves of the state-run football betting option, the aforementioned footie-soldier laughed and explained that “the odds are terrible.” Damn those illegal bookies and their favorable odds!

In Malaysia, police have broken up several betting operations over the past week, including one in Jelebu that police had already shut down once. Bernama quoted a public official complaining that the operators “had not learned their lesson. This time, the gambling areas had been renovated and made more attractive.” Damn those illegal bookies for thinking of their customers’ creature comforts! How mad are Malaysians about football betting? A JobStreet.com survey of Kuala Lumpur human resource personnel found that one of every three firms reported gambling activities among their staff during Euro 2012 (and the other two firms are just really clueless).

In Hong Kong, Operation Dawnsetter has resulted in the shutdown of a football betting ring that reportedly handled wagers of more than HK100m ($12.9m) per month over the past two years, a figure that rose dramatically during the Euro 2012 contest. The Hong Kong Standard reported that the operation was a spoke and hub setup, with headquarters in rented offices in the Si Toi Commercial Building on Connaught Road West serving more than 30 sub-operations across the territory.

Fortunately, not all police appear overly concerned about illegal gambling. In Thailand, the Pattaya city police chief has been temporarily transferred while a probe is conducted into his behavior following a raid on a betting operation. The Bangkok Post reported that police detained 74 suspects during the raid, only to have chief Pol Col Thamanoon Mankhong give the arresting officers a dressing down and order all the suspects released without charge or further interrogation. Sounds to us like someone had a winning wager that he was really hoping to collect on later.

Anyway, see you all again in 2014 for the World Cup! GOOOOOAAAAALLLLL!!!!