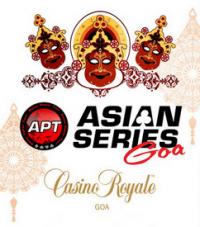 Leave it to the Asian Poker Tour to stage yet another successful event in the Asia-Pacific region.

The highly active APT recently wrapped up the 2012 APT Asian Series in Goa, India, drawing quite a crowd of some of the finest poker players in the world, all vying for the chance to be crowned the 2012 Asian Series Goa Main Event champion.

After a few days of intense felt action, Swedish player Martin Nilsson came out on top to stake claim to a bank account-fattening INR 1.942 million ($35,000). Nilsson edged out local player Manan Khetan despite being short-stacked heading into the heads-up duel. The Sri Lankan-born Swede by way of Beijing, China methodically cut into Khetan’s chip stack before eventually taking control of the action . In the end, the final hand of the Main Event tourney saw Nilsson call his KdJd on Khetan’s AcQh all-in on the flop with a Kc8s8c on the board. The Swede’s made king pair stayed strong in the end as the turn and river produced inconsequential cars of 4h and 6h.

Nilsson may have been the biggest winner of the 2012 Asian Series, but the local Indian contingent made an equally impressive showing, proving that the game is alive and rapidly gaining popularity in the country. Led by Khenan, eight players in the top 10 were from India with only Nilsson and Japan’s Hisashi Ogi (10th place) book-ending the final table standings.

With less than two months before that event, we’re going to make an early call and say that we’re expecting the biggest turnout for an Asian Poker Tour event in its history. Call us confident, but we believe that our friends over at the APT are riding a wave of momentum that seems to have no end in sight, culminating at the 2012 APT Macau that will be played in the one of the world’s biggest gambling markets.