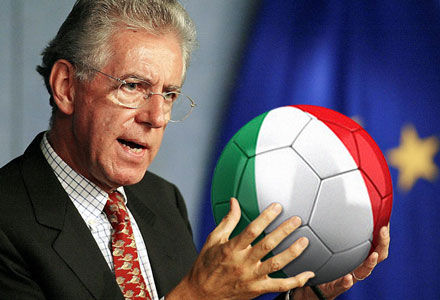 Italian football has plunged deep into another match-fixing crisis, one that has caught the attention of no less than Mario Monti.

In the wake of the country’s latest football scandal, the Italian Prime Minister has floated the rather idea of suspending football in the country.

Speaking during a meeting with Polish Prime Minister Donald Tusk, Monti was careful to explain that he wasn’t making an edict, but rather a suggestion that the sport take a prolonged break to clean itself of whatever illegalities that it has been plagued with in the past couple of years.

“I’m not making a proposal and even less so a governmental one but it is something that sometimes I wish for as someone who has loved football for many years,” Monti said.

“Maybe it would benefit the development of our citizens to have a total suspension of this game for two or three years It’s particularly sad when a world, such as sport, that should express high values is guilty of the most reprehensible ones such as treachery, illegality and deceit.”

Monti’s suggestion of banning football for the next two to three years stems from the latest match-fixing scandal that has plagued the sport in the country. A total of 19 people, including Lazio captain Stefano Mauri and Genoa midfielder Omar Milanetto, have been arrested by the police for their alleged involvement in match-fixing. Investigators have also questioned national team member Domenico Criscito while the player was in the middle of preparations leading up to the Euro 2012 tournament. Likewise, Juventus head honcho Antono Conte was also questioned of investigators.

According to Raffale Grassi, director of SCO, the police service handling the investigation, the latest football scandal has its roots mostly in the country’s highest level of football, Serie A. “In this part of the investigation, indications have emerged of manipulation in matches from the 2010-11 Serie A championship, including games between Lazio and Genoa and Lecce and Lazio,” Grassi told SkyTG24 according to the Daily Mail.

The latest match-fixing scandal is yet another black eye for Italian football where allegations of impropriety and egregious behavior have taken the shine off of one of the world’s biggest football nations. Six years ago, Italian football was at an all-time high after winning the 2006 World Cup, only to be thrown into a pit of controversy after top-flight teams Juventus, AC Milan, Fiorentina, Lazio, and Reggina were all thrown out of Serie A for their respective involvements in the scandal. Of these five teams, only Juventus ended up being relegated to Serie B while the four other teams – AC Milan, Fiorentina, Lazio, and Reggina – were all given stiff penalties, including points deductions and in the case of AC Milan and Lazio, disqualification from the 2006-2007 Champions League.

Banning football for the next two to three years in a country that has long been passionate for the sport may be a tad too premature. But if you’re Mario Monti, something needs to be done to ensure that the integrity of the sport is restored. If it means taking away the sport for a long period of time, then we won’t have any qualms with that, either.