Home / Poker / Five on Friday: Seeing the Light at the WSOP 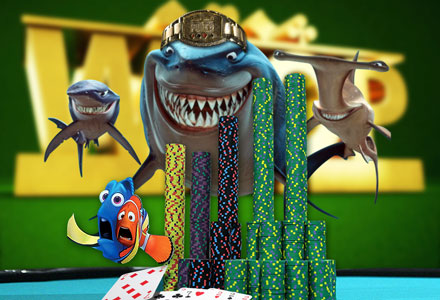 The World Series of Poker is every poker player’s dream. For nearly two months there are multiple tournaments running every day, each one representing an opportunity to win hundreds of thousands of dollars and make one’s mark in poker history. Cash game players love it, too, because there’s a game at every limit almost any time of day, and in all kinds of variants that can be hard to find in other poker rooms around the world. If slinging chips is your thing, the WSOP is the place to be. And since the event attracts so many players of all abilities and backgrounds, there’s often a lot of easy to be made.

Two months is a long time for things to go wrong, though, and for every big winner at the Series there are plenty of players who aren’t doing well at all. When you’re on that end of the spectrum all the pluses start to look minuses. The tournaments can become a money pit if you play for volume without a score, and the 24-hour availability of high-stakes cash games can become a siren’s song for players on a bad run in the lower-stakes games and looking for a quick fix. And if you find yourself continuously snatching defeat from the jaws of victory while pursuing that aforementioned easy money.

If you don’t do something to see the light, a bad run can turn into a nightmare. If you find yourself seeing only the dark side of the WSOP – or if you want to preempt seeing it – consider these tips.

If things aren’t going your way, chances are you’ll think about stepping up the stakes to make up for your losses. This is a bad idea.

To be sure, playing above your everyday level isn’t always bad; if you’re in full control of your faculties and playing your A-game, taking a shot can actually be a very good thing. But players in a WSOP funk are rarely in full control of their faculties. They tend to practice poor table selection, they become overly aggressive in bad spots, they stay at the tables too long trying to get even – in short, they become exactly the kind of player that winners take advantage of at the tables. That’s exactly what you don’t want to do if you’re playing higher stakes. There might be an occasional big fish at those tables, but there’s also a full complement of sharks looking to make a meal of that big fish. If you show up in the wrong mindset, they’re likely to turn you into an appetizer – or if you’re really in poor shape, perhaps the main course.

If you have to play through your bad streak, the better option here is to step down in stakes. The players are almost certainly worse, which means your decisions should be much easier than normal. If you’re a tournament player, consider giving satellites a go for a few days.

One of the beauties of playing poker in Las Vegas is the sheer amount of options you have available to you. Just because you came out for the WSOP doesn’t mean you have to play there all the time.

There are usually several tournament series running around town – events at the Bellagio and the Venetian are on the high end of the scale, while the smaller series that run at downtown casinos and some of the more touristy Strip properties sit on the other end. The money in most of these – at least outside of the Bellagio Cup and the Deep Stack Extravaganza – isn’t anywhere near as good as it as at the WSOP. But then again, neither is the competition. That means the games are at least a level of magnitude easier, and your chances of turning your bad summer around with a win should improve accordingly.

If you’re mostly playing the cash games, you can certainly find softer games all over Vegas. The Strip in particular, with its overflow of schlubby tourists and other amateurs who have seen the game on TV but never tried it in a real life casino, is home to some of the best fish dinners in the entire poker world.

3. Look out for your health

A lot of poker players have a hard enough time taking care of themselves when there’s always a game to be had and they’re doing well. But when you’re in Vegas for a long period of time and you’re losing, looking after your own health can become even more difficult. Focusing on your losses can lead you to neglect proper meals and the rest your body needs, and the easy availability of alcohol and drugs in Vegas means it’s easy to get lost in a depressive spiral if you’re prone to that sort of thing.

If you’re committed to looking out for your health, a lot of the time you could spend wallowing in the despair of losing can instead be spent pulling yourself out of it with exercise. Most of the hotel-casinos in Vegas have a gym, and even if they charge for it’s a lot less costly than a night of drinking or chasing your losses at the table. If you’d rather get your exercise outside, the mornings are a good time to get in a round of golf or a match of tennis before the heat becomes too excruciating to bear. And matching up a healthy diet with that exercise can help you to maintain high energy levels throughout the long days at the WSOP. Chances are you’ll find yourself focusing better, and that might just make the difference between a loss and a win.

4. Make friends (or take them with you)

A stay for the duration of the WSOP is almost always easier if you don’t have to do it alone. It’s common for groups of players to go in on a house for the entire WSOP, and it’s easy to see why. Having someone around to talk to while you’re at the WSOP can be extremely valuable. Talking strategy with others can help you see any obvious holes in your game that you’re overlooking due to tunnel vision. A little moral support – or a kick in the ass, if that’s what you need – isn’t hard to come by when you’re surrounded by people who understand your plight.

If you’re going it alone at the WSOP…don’t. Make a point of finding someone you can talk to. Whether it’s at the tables, or in one of the Rio’s many dining areas, you’ll find yourself surrounded by all sorts of people who have a lot in common with you. Poker players are a gregarious lot in general, so it shouldn’t be too hard to strike up a conversation. Even if you don’t make a friend for life, the human interaction (without money on the line) can do you a lot of good when you’re in a rut.

Any poker room can be a poisonous environment when you’re unable to put yourself in the right frame of mind. But a poker room with no limits that runs 24 hours a day – well, that’s just dangerous if you’re incapable of self-control. When nothing is working for you at the WSOP, the cure is to get the fuck out of the Rio. Studies have shown that, even though they often feel the need to continue butting their heads against the wall until they achieve their goals through brute force, time away from a task is actually highly valuable for problem-solvers. Since poker is nothing if not one problem to solve after another, this applies to you.

If things aren’t going well for you at the WSOP, go do something else – anything else. There are all sorts of activities within your reach when you’re in Las Vegas. Go see the Grand Canyon or Hoover Dam. Catch a summer blockbuster movie at the Palms’ theatre with some of your friends who have busted out or aren’t playing on a given day. Lounge by the pool for an afternoon. It doesn’t particularly matter what the activity is, so long as it allows you to relax and take your mind off the game. When you come back the results you want may not necessarily follow – variance respects no one, after all – but you’ll almost certainly make better decisions.