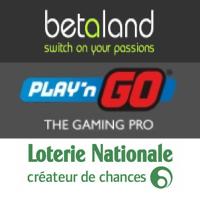 GVC Holdings are disposing of sports book subsidiary Betaland as the “returns” are not enough to “justify the risks” that come with operating the business. It means the brand has been “bought” by GVC New Limited for a nominal fee. The company isn’t affiliated to GVC Holdings and will have changed its name to something completely different within two years. Kenneth Alexander, Chief Executive Officer of GVC Holdings, commented: “The declining profitability of Betaland led the Board of GVC to conclude it should exit this market.”

Betaland’s performance had been declining for some time and it saw their figures down 13.9% at the last check. The disposal itself cannot be completed until the Lotteries and Gaming Authority (of Malta) approves it.

Tatts UK subsidiary Quicksilver has selected Play’n GO to ply them with a range of mobile and web-based casino games. Quicksilver.co.uk will now carry Play’n GO flash games in both web and HTML5 format. Nick Pearson, technology director of Quicksilver, said: “We believe mobile to be a significant future channel for Slot Gaming and Quicksilver are keen to be early to market for this exciting product line.”

Play’n GO’s business development director Robert Skogh added: “Our talented team of developers have worked very hard to create our market leading offering of mobile casino games and we are very happy to partner with Quicksilver to make those games widely available for players on the UK market.”

Belgium’s National Lottery is generating €1 million of turnover every week from its online site. e-lotto.be was launched in March 2010 and is powered by GTECH. It offers the country’s residents a number of games including Super Lotto, Pick 3, EuroMillions and many more.