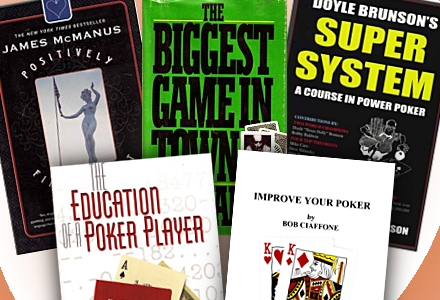 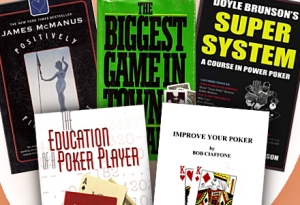 One of the most beautiful things about poker is that it is always evolving. Since the advent of video training, online poker, tracking software, and other modern technologies, that evolution has come at light-speed. Before those days that evolution was as slow as the the games themselves, mostly because the technology used to spread it – the printed book – was even older than the game itself.

Of all the poker books ever written, most of them are eminently forgettable. But some stand out from the crowd, for a number of reasons. They may serve as historical documents, painting a particularly vivid picture of bygone people and times. And in some cases, they may still offer advice that can help one win at the tables.

In order of their year of first publication, here are five old poker books that still hold up well in 2012.

1. The Education of a Poker Player by Herbert O. Yardley (1957)
Despite the inclusion of some casual racism that sadly marks it as a product of its times (Yardley lived from 1889 to 1958), this book, written by an honest-to-goodness secret agent, still works on a few levels.

Yardley’s advice is fundamentally sound enough that you can still win using it. You won’t beat really good players by relying solely on the lessons he relates here, but winning at poker really isn’t about beating good players. It’s about maximizing your odds at all times, and the best way to do that is to play against people worse than you. If you can find some bad players willing to play Five-Card Stud or Five-Card Draw against you, Yardley can help you run them over.

Education also works as an historical document. Yardley learned to play poker in the first decade of the 1900s, a time from which not a lot of poker literature remains. From telling us how poker players thought to how they selected games and tables to what games they spent their time playing, the book does a fine job of describing a world that ceased to exist many decades ago. It also describes the rules for variations on Stud and Draw with or without the joker, the kinds of games that people used to learn playing around the kitchen table before online poker streamlined the games of choice and made the Joker card obsolete.

2. Super/System: A Course in Power Poker by Doyle Brunson (1979)
Big-bet games have been the standard in poker for nearly a decade now, reversing the long dominance of limit games and emptying the bankrolls of tens of thousands of impatient players along the way. If you want to trace the advanced strategies of today’s winning big-bet players all the way back to the source, you need go no further than Super/System. Like The Art of War, only for for poker players, the book describes Doyle Brunson’s “power poker” approach to the game. It’s immediately recognizable as the forebear of today’s typically hyper-aggressive no-limit hold’em players.

Like The Education of a Poker Player, though a bit less dated, the advice for many of the games is a good enough blueprint to help you develop a solid winning strategy. This is especially true for the older limit variants, some of which haven’t seen much more advanced analyses widely published in the intervening decades. As for the no-limit hold’em advice, it’s a mixed bag these days; savvy players will see your tricks coming a mile away, but you’ll demolish less-advanced opponents the same way Brunson did in the old days.

The book also provides an insight into the life and times of Brunson himself. He may not be out there running over tournament fields or dominating big-bet cash games the way he used to, but the 10-time World Series of Poker bracelet winner and two-time Main Event champion is still one of the most successful players ever to take to the felt. The chance to read about his experiences as a Texas road gambler in the man’s own words is a priceless portal to another bygone era.

3. The Biggest Game in Town by Al Alvarez (1982)
Alvarez’s book isn’t a poker book in the same way as the first two entries on this list. There’s hardly a mention of poker strategy in this slim volume – fitting, since the author is the only one among the five here who was an amateur poker player. As a literary writer, however, the highly respected Alvarez brings a poetic flair and an outsider’s eye for detail to his descriptions of the 1981 WSOP.

Much of the early WSOP history taken as gospel today comes straight from The Biggest Game in Town. Alvarez had the ear of the Binion family, not to mention plenty of the game’s early forces, from Jack “Treetop” Straus to Doyle Brunson. That led to the inclusion of some self-serving stories as legitimate history, but the tales are related so well that they’re entertaining if not always altogether true in the strictest sense. He also didn’t make much mention of then-rising star Stu Ungar, who won the Main Event that year and would go on to become one of the game’s most legendary figures.

The early WSOP era was already giving way to the expansion of the game in 1981 when Alvarez arrived in Las Vegas. His book still stands today as a singular look at that time and place.

4. Improve Your Poker by Bob Ciaffone (1997)
Probably the least-celebrated book on this list, in some ways Ciaffone’s tome is the most indispensable in terms of practical poker advice that still holds up today.

Part of the lasting appeal of the book is that it’s a collection of short essays about a wide variety of topics rather than a volume that attempts to explain one variant or another in exhaustive detail. There’s as much attention given to general concepts and gambling basics, like reading your opponents or managing a bankroll or understanding the value of an overlay, as there is to the ins and outs of any specific poker game like hold’em or Omaha.

As Ciaffone notes in the introduction, he had been playing poker for 47 years by the time the book was published. Most of that time was logged in medium-to-high-stakes cash games, though he also played in tournaments from time to time (and finished in third place at the 1987 WSOP Main Event). All that experience, combined with the knack for explaining things simply that earned him the nickname “Coach,” will prove invaluable to anyone looking to build a solid foundation for a lifetime at the poker tables.

5. Positively Fifth Street by James McManus (2001)
McManus’ book mixes two stories into one riveting read. The first is the trial of Sandra Murphy and Rick Tabish, accused of murdering Ted Binion, son of Horseshoe casino owner and World Series of Poker founder Benny Binion. The second story is the tale of McManus’ own unlikely journey from working a magazine assignment to winning a single-table satellite tournament to making the 2000 WSOP Main Event final table.

McManus, a novelist and college writing instructor at the Art Institute of Chicago, spins the two threads together so seamlessly that the 400-page book breezes by. Thanks to his close attention to detail, the book serves as a time capsule of the very end of the pre-online poker era. Back in 2000 the stars of the previous 15-20 years, like TJ Cloutier, were still shining bright. Meanwhile some of the players who would shape the post-poker-boom era, like McManus’ tablemate and eventual champion Chris Ferguson, were only beginning to come into their own. The past and future of poker were regularly rubbing elbows at the tables, not knowing at the time that the game they played would change forever within just a few short years.