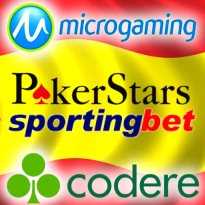 Struggling online sportsbook World Sports Exchange (WSEX) has informed its remaining dozen or so poker players that it is shutting down its World Poker Exchange room effective Feb. 15 at 1pm. In a slightly more significant poker pullout, Pokerfuse spoke to a representative from NordicBet, one of Microgaming’s poker skins, who confirmed that the network is pulling skins out of Spain — at least, those that have yet to apply for one of the country’s new online gambling licenses. Spanish poker players on Microgaming skins that have yet to apply are being told that their poker balances are being transferred to their principal betting accounts on the sites.

If Spanish operator Codere had its way, all international online gambling operators would follow Microgaming’s lead and get the hell out of Dodge. Codere launched legal action against Bwin last April, asserting that the Austrian outfit’s online presence in the unlicensed market amounted to “unfair competition” since land-based operators like Codere had no choice but to observe the local laws and stay offline. Codere believes that any operator that established an online presence pre-regulation will hold an unfair market advantage over newcomers like themselves. The remedy? The scallywags should be forced to ditch their brands and customer databases and pay back taxes dating from, say, the dawn of the internet.

In December, Codere made similar allegations against Sportingbet and PokerStars, seeking injunctions to block the sites’ access to Spanish punters. (Gambling Compliance reports that Codere has “copy and pasted” similar injunctions against other companies serving the Spanish market.) A commercial court in Madrid subsequently granted an interim injunction against Sportingbet’s Spanish-facing site Miapuesta, which was then blocked by Spanish internet service providers and payment processors. Sportingbet was compelled to put up a €2m deposit to lift the injunction while the case is before the courts.

But Codere’s victory wasn’t a clean sweep. On Jan. 16, a Barcelona mercantile court rejected imposing an injunction against PokerStars, noting that Stars held another EU-based license and had formally applied for a Spanish license once the government decided to offer them. In the meantime, Judge D. Luis Rodriguez Vega ruled that Stars “cannot be liable for not having obtained the authorization, given that they did not have the chance to do it.” Codere must decide this coming week if it will appeal the decision.

The only market where Codere maintains an active online presence is Italy, but here, too, Stars is drinking their milkshake. Following the launch of their real-money iOS app in Italy, Stars has now released a similar version for Android. Unlike the iOS version, which was only available via iTunes, Stars is making the Android app available directly from its own site. That is, unless Codere objects…