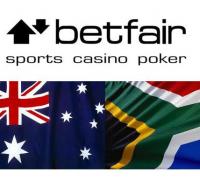 Gambling might be illegal in South Africa, but after a recent commission recommended changes to the legislation – Betfair’s public affair manager, Tom Tuxworth, has also piped up. As reported by Bingo Supermarket, Tuxworth warned a parliamentary committee that online gambling should be legalised in the country because not doing so will result in people using international, unregulated gambling websites anyway.

Tuxworth cited the H2 Gambling Capital and Gambling Compliance when advising the committee – stating that online gambling in South Africa could generate Rands 6 billion in revenue and add up to Rand 1 billion in taxes.

He said that the expected level of growth would be approximately 10% a year until 2015 and also suggested that a change in gambling laws could give the country an opportunity to become “a technology hub” for the industry.

Betfair has also made news over in Australia today, with the company saying that Prime Minister Julian Gillard is at odds of $2.92 to be Labour leader at the next election.

In a statement, the bookmaker said their customers only give Gillard a 30% chance of holding her job.

“Unlike betting with the bookmakers or the TAB, odds on the Betfair exchange are set by punters themselves, meaning the market acts like a real-time opinion poll of public sentiment,” the statement said.

A Betfair spokesman added: “Betfair punters think it’s all over for Julia Gillard and are increasingly sure Kevin Rudd will be back in the Lodge in time for the next election. Julia Gillard had traded as low as $1.55 to hold on, but Betfair punters remember what happened last time leadership speculation reached this level, and all the money since Australia Day has been for Kevin Rudd.”