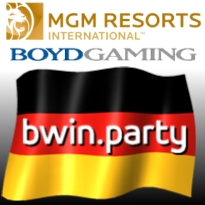 MGM Resorts and Boyd Gaming are the latest candidates seeking the right to offer online poker in Nevada (and across the USA, if Nevada Senator Harry Reid has anything to say about it). CardPlayer claims to have obtained information that both casino companies have submitted applications to the Nevada Gaming Control Board for consideration to be granted online poker operating licenses. Combined with Caesars Entertainment, Fertitta Interactive, South Point Poker and Monarch Casino & Resort Inc., fully half of the total 12 GCB applicants are looking to earn some sweet operatin’ money. The six applicants seeking only the right to supply technology to the approved operators are IGT, Cantor Gaming, Shuffle Master, Bally Technologies, 888 Holdings and Aristocrat Technologies.

Conspicuous by their absence on that latter list is Bwin.party (Pwin), which has entered into a joint venture threeway with MGM and Boyd, for which Pwin would supply the technology (and control 65% of the new US-facing entity). Pwin also retained the option to apply for its own operating license at some point in the future. As for why Pwin’s technology application wasn’t submitted along with MGM & Boyd’s paperwork, we can only speculate. Perhaps they’re waiting for the word Megaupload to fade from the headlines?

Pwin co-CEO Jim Ryan recently sat down with PokerStrategy to discuss a wide variety of topics, including the future of US poker. Ryan said it was “our expectation” that regulated US poker rooms would be ring-fenced from dot-com liquidity, yet Ryan also expects non-US players will be allowed access to US poker rooms. Ryan says 2012 will be the year that Bwin and PartyPoker finally pool their poker liquidity (a year after the two companies officially tied the knot), with the dot-com merger happening in “early summer” followed by the addition of their Italian and French operations “later in the year.”

As for Pwin’s operations in Germany (which the German government and courts have repeatedly declared illegal), Ryan takes the view that “the current state treaty and the proposed revised state treaty violate European Union law. We will therefore continue to offer our products in Germany as long as the German legal regime does not comply with EU law.” This is the same ‘foolish mortals, your weapons are useless against us’ approach Pwin initially took with regard to Belgian gaming regulators, only to do an abrupt about-face last month. (For what it’s worth, it’s also the stance PokerStars and other firms took in regard to the US gambling laws’ non-compliance with WTO court rulings, which prompted Pwin execs to label these companies ‘criminals’, but we digress…)

Pwin is pinning its German hopes on Schleswig-Holstein, the lone state that declined to join the other 15 in approving the new interstate gambling treaty, and which has proposed its own regulatory/tax plan that has garnered much love from international online gambling firms. This week, Germany’s federal government expressed concerns about the proposed 15-state treaty, stating that the European Commission may indeed find state aid issues to complain about. However, even if the treaty is rejected, that wouldn’t automatically clear the way for Schleswig-Holstein’s plan to go forward. Before any new gambling taxation scheme can be implemented, the federal 1922 Race Betting and Lottery law would need to be amended. Schleswig-Holstein has stated it intends to issue its first licenses by March 1, but with no guarantee that such a license would be regarded as legal by the federal government, many companies not named Pwin are adopting a wait-and-see attitude.