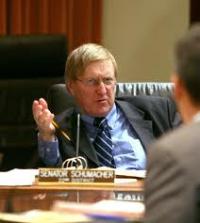 The surrounding states of Nebraska may begin to feel threatened as its state senator introduced a constitutional amendment yesterday that could see the building of gambling houses unless casinos across the border give Nabraska a share of their proceeds and taxes.

Seator Paul Schumacher of Columbus was the man who introduced the bill, estimating that Nebraska could bring in $50 million to $100 million in extra revenue from Iowa alone, which is great news for Nebraska, but not so much for Iowa.

Is this fair? Well, seen as though many Nebraskans travel to the surrounding casinos to speed their money anyway, then Schumacher does have a point.

Nevertheless, if the legislation is passed after its required statewide voter approval, the state would be authorised to approve the building of casinos. But Schumacher said his proposed bill isn’t about expanded gambling, oh no. It’s about “expanded revenue”, apparently.

In a report by the Omoha World Herald, he said:  “There are 3,000 to 4,000 slot machines poised on Nebraska’s doorstep in Council Bluffs, and they’re poised there for one reason, to plunder our resources and keep the money in Iowa. We’re satisfied that three casinos are probably enough in the Omaha metropolitan area, so give us our tax money and we’ll keep the status quo.”

However, as always, there is opposition to the idea. The chairman of the legislative committee, Senator Russ Karpisek thinks the idea has “poor odds”. He said: “I agree with him that we’re losing a lot of revenue to the states around us — everyone has casinos. But I don’t think Iowa is going to give us money. I don’t think this is going to happen.”

According to the report, several other state lawmakers agreed, saying the anti-gambling mood at the State Capitol hasn’t changed. And with two-thirds of Nebraska’s population within an hour’s drive of casinos just across the border, will Schumacher’s bill get passed? He said his Legislative Resolution, code named 375CA, is “a novel approach” at getting at the loss of dollars in out-of-state casinos (that’s $300 million to be precise) without authorising a gambling house in Nebraska.

Schumacher explained that if the bill was passed, state legislators would be authorised to approve casinos later only if neighbouring states refused to share their gambling proceeds. “It is simply, simply wrong to be so generous to other states that are poaching our resources,” he added.

Schumacher is pretty confident the bill will work, and if it works in the way he wants, no new casinos would be built and Nebraska would enjoy a windfall in new tax revenue. But does it have enough backing?