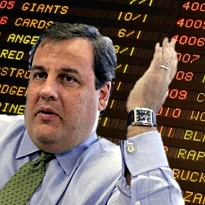 New Jersey took another step towards bringing the joys of sports betting to the Garden State on Tuesday, after Gov. Chris Christie signed legislation directing the Division of Gaming Enforcement to draft regulations to facilitate sports betting by state residents aged 21 years or older. Under the terms of the legislation, Atlantic City casinos and the state’s four racetracks could offer sports betting, the revenue of which would be subject to the same 8% tax casinos pay on gambling winnings, plus a 1.25% levy designed to fund future AC revitalization projects. The original version of the legislation also contained the option to place sports bets online, but was removed prior to Christmas in order to ensure Christie’s signature.

Joe Brennan, director of the Interactive Media Entertainment & Gaming Association (iMEGA), described the governor’s endorsement as “very satisfying,” particularly in light of the “long and comprehensive effort to bring regulated sports betting to New Jersey.” A statewide referendum last November returned a result of 2:1 in favor of the plan. State Sen. Ray Lesniak, a longtime booster of online gaming, told the Associated Press that Christie’s signature was “the beginning of the end for the unfair, discriminatory and unwise federal ban on sports betting” which has “failed to curb the public’s desire to bet on sporting events.”

The next step in the process will be for state attorney general Jeff Chiesa to file a court challenge of the federal Professional and Amateur Sports Protection Act (PASPA). The Act, which bars all but four states from engaging in any form of sports betting, and only allows unfettered single-game sports betting in one (Nevada), has long been regarded as unconstitutional by backers of New Jersey’s sports betting bid. A previous attempt to overturn the Act was rejected by a federal judge in March 2011, but Christie’s signature effectively removes the main justification for that dismissal. Lesniak said Chiesa “already has the legal arguments to blow a bigger hole through the federal ban than San Francisco 49ers’ Anthony Davis could do to the Giants defensive line.” Nice touch, Ray.

Also on Tuesday, Christie approved legislation permitting bars and restaurants in the state’s northern counties to offer horseracing bets via electronic wagering terminals. The three-year pilot program will issue temporary licenses, subject to review and renewal on an annual basis. At the conclusion of the program, the state’s Racing Commission will submit a report on whether the scheme should continue, and if so, what changes need to be made. Assemblyman John Burzichelli called the program “a key piece in our ongoing effort to ensure New Jersey’s horse racing industry remains a strong and viable economic engine and entertainment attraction. It’s a true win-win and a common sense approach to today’s consumer demands and desires for convenience and ease of access.”