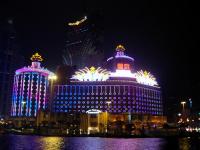 Macau could soon see an influx of “non-local” dealers working in their casinos. Zeng Zhonglu of the Polytechnic Institute made the recommendations as growth in the world’s number one casino location continues to mean supply for jobs is buoyant whilst at the same time there aren’t enough local workers. Zhonglu told Journal Tribuna de Macau that foreign dealers are “essential for competition” and that allowing foreign dealers to dish out cards the domestic ones could make their way further up the employment ladder.

Chief executive Fernando Chui Sai On has said that whilst he’s in office there are no plans to adjust the rules concerning overseas citizens working as croupiers and the level will remain the same for the time being.

Casino business locations will be pleased to know that over the New Year arrivals were up 8.1% compared with last year. 324,000 visitors flocked to the enclave over the three day period between January 1st and 3rd. It again suggests that Macau will be fairly unaffected by the recession for some time yet.

Junket operator Asia Entertainment and Resources Limited saw an improvement of 31% in rolling chip turnover for the month of December and even more for the year as a whole. Figures for the company’s VIP rooms in Macay reached US$1.756billion and backs up the assertion that VIP revenues are the ones driving the enclave’s burgeoning casino business market. For the year as a whole the firm’s rolling chip turnover was up a huge 91% to US19.932bn and the May 2011 opening of a VIP room at Galaxy Macau had a lot to do with the increase.