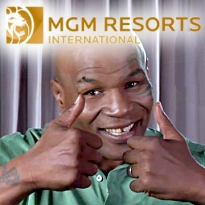 VegasInc quoted MGM’s court filing as accusing the defendants of having “a bad faith intent to profit from their registration of the domain names” which MGM claims are “confusingly similar” to its own trademarks. MGM is asking for temporary restraining orders to prohibit the defendants from using the domains. While some of the domains were registered almost a decade ago, the issue has taken on new urgency in the increasingly favorable climate towards online poker in US political circles. MGM filed a similar suit in August against a Washington individual for operating domains allegedly infringing on MGM’s Gold Strike casino trademarks. In October, Bwin.party won two cybersquatting suits involving domain derivatives of bwin.com.

The latest victory in the domain name wars comes from a man quite used to crushing his opponents, former boxer and current nutter Mike Tyson. Michael Gerard Tyson filed a complaint with the World Intellectual Property Organization (WIPO) against Dreamseller Inc.-In Stealth Mode and J. Williams DomainManager of Centreville, Virginia over the use of the miketyson.com domain. Tyson’s opponent registered the domain in 2004, while Mike hadn’t officially trademarked his own name until 2008. But Tyson’s complaint argued that the fame the boxer had attained since turning pro in 1985 — Tyson is described as an “international megastar” of “legendary status” — had long since established rights in the mark via common law. WIPO agreed. Not sure if Tyson’s complaint threatened to eat WIPO’s children, but that probably would have worked, too.