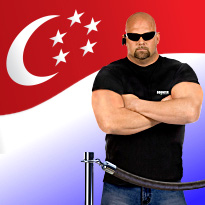 Singapore’s government intends to make it “crystal clear” to both Marina Bay Sands and Resorts World Sentosa that the two integrated resorts “cannot target the domestic market.” TodayOnline.com reports that Chan Chun Sing — Acting Minister for Community Development, Youth and Sports — is making amendments to the Casino Control (Advertising) Regulations “to cover not only advertisements, but any promotion of the casinos, which should prevent incidents like the heartland shuttle buses.”

To “signal that gambling is an expense and not a means to make a living”, the government could raise the $100 casino entry fee charged to local residents. But Mr. Chan feels “the jury is still out” as to whether that would deter residents from entering or cause them to “max out the upfront cost” of entry. (Chan dismissed suggestions that the entry fee would be extended to foreign tourists.) The authorities have chosen instead “a targeted approach of combining education and casino exclusions.” Chan also cautioned that however stringent the safeguards, they “should not and cannot replace individual responsibility.”

Responsibility is on short display in this next item. Since Singapore’s two casinos opened last year, the authorities have issued over 26k exclusion orders, among them one Tan Chee How. Despite serving a three-month ban from Resorts World Sentosa, the 38-year-old Tan was granted entry on six separate occasions using his wife’s identity card or driver’s license. (Seriously, facepalms all around.) Adding insult to injury, not only did Tan lose a fortune, he was hit with a hefty fine by the courts. According to ChannelNewsAsia.com, Tan has since applied for a self-exclusion order. Let’s hope both casino and punter try a little harder to observe the terms this time around.

Exclusion lists have cost some winning gamblers in Atlantic City almost $70k in recent months. The AP’s Wayne Parry says most of that came off a single gambler at Bally’s Atlantic City this April – a poker player identified only as “GSD” who won a pot worth $53,933. To redeem his chips, GSD had to present ID, and it turned out GSD had signed the state’s self-exclusion list back in 2003, requesting that he be barred from all Atlantic City’s casinos for life. So GSD went home empty handed; a bad beat right out of The Twilight Zone. GSD’s forfeited bankroll, like all funds similarly confiscated, goes to compulsive gambling programs plus a state fund that helps procure pharmaceuticals for senior citizens. So every Viagra-inspired grampa getting his wrinkled willie warmed has gamblers like GSD to thank. You’re welcome.