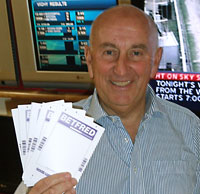 A collaboration between a number of iGaming industry veterans has launched Bet-at.eu. The online casino business is licensed in Malta and, according to eGR, went live earlier this week using Chartwell games. Among those working on the project are Igor Samardziski (head of casino) formerly of Betfair and Betsson and Johann Galea (head of fraud and payments) once at Expekt. In addition Thomas Rhys Jones (once at InterPartners) arrives as acquisition manager with Katerina Younes recruited from Betsson as head of customers services. The site sponsors the Lyceum Media Holiday iGaming Social where you can have a drink on them!

Fred Done has recruited football’s number one geezer-bird to star in Betfred’s latest advertising campaign. Helen Chamberlain, best known as the face of Saturday morning football show Soccer AM, joins Done to promote the firm’s successful Goals Galore product. Torquay’s finest explains in a behind the scenes video that she simply had to shout a lot before footage of her celebrating by jumping on the back of a load of random blokes. Goals Galore invites punters to predict games they think both sides will register a goal in and is available in the firm’s 1,350 shops, online and on mobile. Betfred boss Done commented: “It was great working with Helen and I am delighted she has agreed to be the new face of Goals Galore. I can’t believe how popular the bet has become and this will just make it even bigger. More than ever I will be praying for clean sheets!”

The campaign gets underway on Sky in December and you can see what happened behind the scenes on the following video.