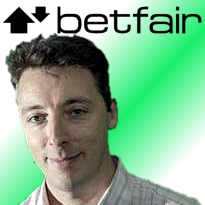 Sky News is reporting that Paddy Power COO Breon Corcoran will be announced as Betfair’s new CEO sometime next week. In June, current Betfair chief exec David Yu announced his intention to ride off into the sunset after six years at the helm, during which he helped shepherd the betting exchange through its (initially wildly successful, then, er, not so much) introduction to the stock market. Corcoran has been a Paddy person for the past decade, but as far back as August, smart money had him as the inside favorite to become a Betfair bigwig. Corcoran is expected to make the move to London once he formally assumes his new duties.

Corcoran began his tenure at Paddy Power right about the time PokerStars came into existence. The online poker star marks its 10th year of operation this month, and the celebration dovetailed nicely with the company approaching its 70 billionth hand dealt. To promote this latter Mega Milestone, the company promised to award $70k to the player who won the hand in question. And so it was that a player named ‘koenigskeba’ defeated ‘DodgeUrOuts’ heads-up early Friday morning to take the magic hand and the sweet promotional green that went with it.

But hold the phone. As could be expected, some players subsequently scanned koenigskeba’s hand histories leading up to the winning hand, and discovered that Mr. 70 Billion and DodgeUrOuts had been playing heads-up at 24 separate tables as the magic hand number approached, repeatedly open-folding to one another, playing thousands of hands without generating any rake. To some players on Stars, this amounted to collusion, which they felt compelled Stars to void the $70k payout and find the ‘real’ winner. To others, these two players had simply found a way to (marginally) better their odds of winning the promotion without negatively impacting any other players, and since it paid off, hats off to them.

In response to the outcry, Stars issued the following statement: “We have reviewed the circumstances around the winning hand, and have determined that while this practice of ‘fast-folding’ may not be in the spirit of the promotion, it does not violate the rules and regulations of the promotion. As such, we have honored our promotional award. Please note, we are reviewing the format of the promotion to try to minimize this kind of activity in future milestone hand promotions.” There you have it, kids. But with the speed with which Stars deals hands, you don’t have much time to figure out ways to manipulate the 75 billionth hand promo.