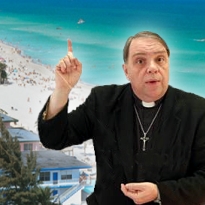 While US land-based casino companies are salivating over the prospects of getting in on the destination casino business in Florida, not everyone is as enthused. The Walt Disney Company, for one, thinks casinos would spoil South Florida’s pristine something or other. Now a coalition of religious organizations has added its two cents (which we hope they didn’t get from the collection box) to the debate.

On Tuesday, a press conference featuring members of the Florida Catholic Conference, the Florida Baptist Convention, Florida Family Action and Florida Casino Watch delivered God’s warning to the casino heathen – in particular state Senators Ellyn Bogdanoff and Erik Fresen, who introduced the pro-casino legislation last month. Former Rep. Dennis Baxley, now head of Florida’s Christian Coalition, called the casino plan “the biggest brand change” in state history. Florida Family Action honcho John Stemberger said he and his brethren “will not sit back idly as the gambling industry attempts to buy out Florida and her elected officials with the corrupting influence of the gaming money that is floating around Tallahassee like a bad flu bug.” (We like to think Stemberger then sneezed loudly for dramatic effect.)

God’s warriors on earth intend to hold Florida lawmakers up for public scorn or praise, depending on how they vote on the casino bill, on an online Wall of Fame and Wall of Shame. (We’d put this whole venture on our own Wall of Lame, if we could be arsed to erect one.) To back up their stance, they point to a Hill Research Group poll that found only 20% of Floridians thought it was a good idea to expand casino operations, while 77% wanted to either hold the status quo or reduce the state’s current gaming presence. These numbers don’t reconcile with American Gaming Association statistics showing that only 16% of Americans believe gambling is “not acceptable for anyone”, compared to 81% who believe it’s either “perfectly acceptable for anyone” or “acceptable for others but not you personally.”

For some understanding as to why anti-gambling religious groups’ messaging needs effective countering, look no further than Hazem Salah Abu Ismail, who intends to run for president of Egypt when free elections are held some time in 2013. He’s also in favor of shuttering casinos, which, in Egypt’s case, are only accessible by foreign tourists. Ismail also intends to push for mandatory Islamic dress codes for women, despite the fact that 12% of Egypt’s population is Coptic Christian, who have never worn hijabs or niqabs. Ismail would also insist on the arrest of female tourists caught wearing two-piece bathing suits. So how far do you want to go with this, Florida? South Beach Burqas? Time to draw a line in that white sand.