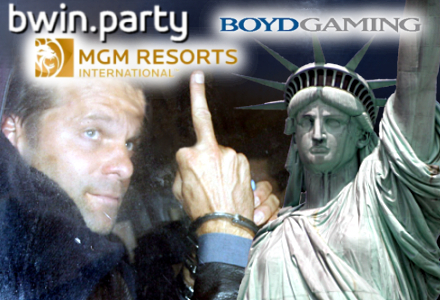 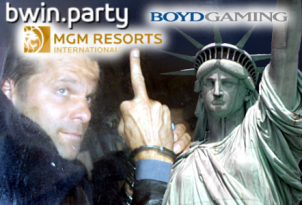 Pan-European online gaming operator Bwin.party (Pwin) has inked a deal with US land-based casino outfits MGM Resorts International and Boyd Gaming Corp. to cooperate on a US-facing online poker operation if/when the US government ever gets around to passing the appropriate legislation. The deal would see the formation of a new entity – 65% owned by Pwin, 25% by MGM and 10% for Boyd – that would (initially) operate under the PartyPoker and World Poker Tour brands.

There are also provisions for Boyd and MGM to spin off their own online brands that would utilize Pwin technology. Boyd’s solo deal is for a 15-year term. MGM’s deal is thought to be the same. Pwin would also have the option of applying for its own license directly from the Nevada Gaming Commission. Pwin co-CEO Jim Ryan told Forbes: “Effectively you will have four brands in the US and all four brands will be acquiring players and putting them in one hub, one poker network.” Each member of the troika will bear start-up and operating costs based on their pro-rata share in the JV.

Boyd Gaming CEO Keith Smith told the Las Vegas Review-Journal that Pwin was their best bet because “integrity is very important.” MGM Resorts Chairman Jim Murren said they picked Pwin as their dance partner because “Bwin.party is a company that has done it right and done it successfully. They have operated successfully in strictly regulated environments.” The Bwin half of Bwin.party also operates in strictly unregulated markets, such as Germany. Bwin has repeatedly been told by regulators and courts that it is operating outside the law by offering services to German punters, but as the company derives a quarter of its revenues from the German market, it has consistently chosen to ignore those regulators and judges. And Pwin co-CEO Norbert Teufelberger holds the dubious distinction of having been arrested for flouting similar laws in France.

Ryan told the Associated Press that his company had been preparing for scrutiny from gambling regulators. The American Gaming Association’s recent position paper on US online poker puts a distinct emphasis on regulators’ ability to deny a gaming license application if they “simply doubt the integrity of the license applicant.” No doubt regulators will carefully consider Bwin’s antics in Germany, not to mention Norbert’s prison tattoos.

Pwin’s “anticipatory” deal is contingent on US legislators passing the appropriate laws. After the recent House subcommittee hearing on online poker, in which most of the participants expressed the sentiment that the time has come for a regulated US system, hopes for federal legislation have been flying high. Whether it’s willful denial or sheer ignorance, few people seemed to have paid attention to the post-hearing comments by Chairwoman Mary Bono-Mack (R-CA): “There’s just way too much here that has to be fleshed out and to put it into the work of the supercommittee. We have to find a balance of moving it and balancing the technological problems with the policy problems. I think to rush it would be a mistake.”

All parties involved in the Pwin/MGM/Boyd deal are pinning their hopes on a federal law passing, although they claim they would also participate in a state-by-state regime if that’s how the penny drops. It has long been this site’s assertion that when online poker comes to the US, it will be on a state-by-state basis, rolling out over a period of many years. Assuming there’s no successful federal legislation this year, the initiative will pass back to the states, especially California, which is slated to resume discussion of its intrastate online poker bills early in 2012. Playtech already has the inside track on that market, which has been quite vocal about not ceding the Golden State’s gaming authority to “Nevada and its casinos.” Let’s get ready to rumble…