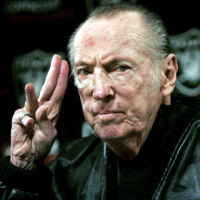 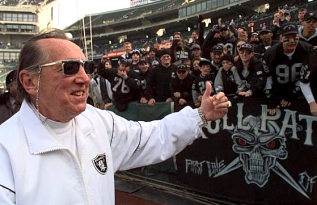 Al Davis, the iconic owner of the National Football League’s Oakland Raiders, has died at the age of 82. Davis’ nearly half-century tenure with the Raiders began in 1963 when he was hired as head coach and general manager (earning American Football League Coach of the Year honors in his debut season). Davis stepped down as coach three years later to serve as commissioner of the AFL, until it merged with the rival NFL to become the league we recognize today. Davis became part-owner of the Raiders in 1966, then managing general partner in 1972, which gave him virtual control over all team matters.

With Davis at the helm, the Raiders posted a winning record unmatched by any other team in pro sports over a period of nearly two decades (1967-1985). Davis was widely credited with developing football’s ‘vertical game’, in which long-bomb passes weren’t reserved for last-second Hail Mary’s. Davis also earned a reputation as a keen judge of football talent, routinely picking up other teams’ castoffs and offering them another shot at glory. The most celebrated of these, QB Jim Plunkett, helped the Raiders win two of their three Super Bowl trophies.

Never shy to voice his opinions, Davis was a continuous thorn in the NFL’s side, particularly when he sued the league for trying to prevent him from moving the Raiders to Los Angeles in the early 1980s. Davis won the suit, and the image of NFL commissioner Pete Rozelle smiling through clenched teeth as he presented Davis with the Vince Lombardi Trophy a few years after the relocation remains one of the NFL’s off the field must-see moments.

Despite an affluent upbringing, Davis cultivated a street-tough image, an identity his players were only too eager to emulate. The Raiders’ intimidating on-field presence gave extra significance to their pirate logo, which became the de facto uniform of Los Angeles ‘gangsta’ rappers in the 1980s. Official Raiders apparel led the league in sales for years, prompting a host of other teams across the sports spectrum to adopt similar color-schemes – a compliment the fiercely independent Davis didn’t always appreciate. 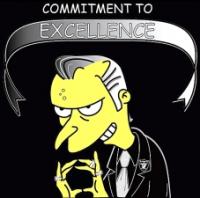 Davis was color-blind, which led him to adopt a personal wardrobe limited to variations on the silver/black/white Raider colors, but color-blindness didn’t stop at his closet. Davis was the first NFL owner in the modern era to appoint Latino (Tom Flores) and black (Art Shell) head coaches. Davis also hired Amy Trask as CEO, the first woman to occupy that role in the NFL.

Davis’ passing follows the death of an equally iconic figure, Apple’s Steve Jobs. While popular wisdom suggests Apple’s fortunes will suffer without Jobs’ visionary guidance, many are predicting the Raiders’ fortunes could actually improve now that Davis is gone. While Davis loved to talk about the “greatness of the Ray-duhs,’ this signature catchphrase had lost much of its legitimacy. Over the past decade, only the woeful Detroit Lions recorded a worse winning percentage.

Davis was probably the most hands-on owner in pro football history, as a litany of former Raider coaches would attest. (Nine men have held the position since 1995 — five in the last seven years.) To hear some of these ex-coaches talk, Davis was the NFL version of The Simpsons’ C. Montgomery Burns — a sinister, out of touch, megalomaniac meddler, who, coincidentally, was also fond of the word ‘excellence.’ It will be revealing to see if current coach Hue Jackson’s approach to play calling changes in Davis’ absence.

Regardless of how the Raiders do in the future, their place in football history is assured, largely due to Davis’ willingness to swim against the tide. Asked for comment on Davis’ passing, rapper Ice Cube told the NFL Network: “What [the Raiders] showed to us was that you can be yourself and you can still win. You don’t have to conform always to the mainstream or to the status quo. You can come out be yourself, own it and you can win.” Baby.