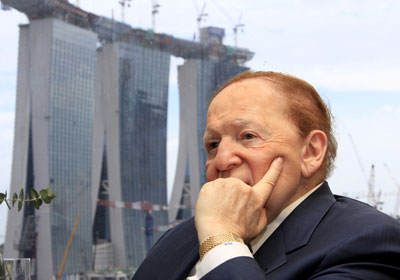 Las Vegas Sands Chairman and CEO Sheldon Adelson has returned to the top 10 richest people in the United States. The casino-mogul’s net worth grew by around $7billion this year meaning that he now sits in eighth place on the list of American Billionaires after moving five places into the top ten. According to Forbes the 78-year-old’s net worth sits at $21.5billion and he has Sands China to thanks for much of this. Elsewhere in the top 25, John Paulson, a hedge-fund investor in a number of casino business companies, was placed 17th with Carl Icahn, a former investor in a number of Nevada casinos, in 25th.

Almost 90% of LVS’ operating profit comes from Asia, a region that formed the crux of an interview Adelson gave to Bloomberg. The LVS CEO predicts that gross gaming revenue could “easily grow” by as much as 50% or more this year on the casino business enclave. The full-and-frank interview also confirmed rumors that the company would be paying a dividend by stating, “We are seriously considering a dividend, probably next year.”

Adelson also addressed the ongoing case that was brought against him by former Sands China CEO Steve Jacobs. The LVS head is “100% certain when the smoke clears nothing will be found as there’s nothing to find.”

Adelson added, “Allegations were done for PR purposes and to squeeze out a better settlement.”

Wikileaks cables, seen by CalvinAyre.com earlier this month, revealed the extent to which American public companies had come into someone else’s backyard and treated it as their own whilst telling those in Macau how to run their own operations aka being pretty darn disrespectful.

The full interview can be seen below: