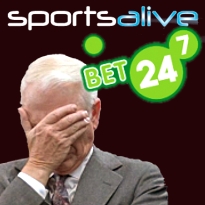 On Thursday, (Aug. 25), liquidators Bent and Cougle took control of what’s left of Australian online betting agency Sports Alive. The Australian Capital Territory (ACT)-licensed, Melbourne-based Sports Alive’s sudden demise has left punters and investors alike searching in vain for (a) their money and (b) an explanation as to what the hell happened. Bet247, a separate company that operated through Sports Alive, has already been absorbed by horseracing bookie Tom Waterhouse, but no such white knight has yet to ride to Sports Alive’s rescue.

While the situation remains murky, it appears that Sports Alive had not segregated player funds from its operating capital. The terms of Sports Alive’s ACT license required the company to post a $250k bond to help cushion the impact of just such a collapse, but this figure represents a fraction of the total amount owed to account holders. Bent and Cougle’s Hamish MacKinnon told the Canberra Times that “an estimated $1.5m has been stripped from punters; at the moment there isn’t money to pay everyone.” MacKinnon said his firm would be contacting creditors in ‘early September.’ In the meantime, the liquidators are looking to sell Sports Alive’s database.

Tasmania’s state-owned TOTE owned a 25% stake in Sports Alive, believed to be worth about $4m. As bad as that may be, things could have been much worse, as TOTE Tasmania’s 2009-10 annual report included a statement that it planned to up its stake in Sports Alive to a “controlling interest.” Sports industry investor/manager Peter Sidwell and Victorian bookmaker Gary Walsh also held stakes in Sports Alive estimated at about a half-million apiece. While the company was believed to have recorded annual profits of $4-5m in both 2008-09 and 2009-10, an insider told SmartCompany that Sports Alive’s implosion was primarily “a case of a badly run company.”

At the risk of piling on, Sports Alive’s plight underscores the importance of placing one’s trust in companies that have built strong global brands, particularly those that are implementing a solid Asian strategy (as this would necessitate substantial liquidity). In this rapidly evolving industry, underfinanced, poorly managed and badly structured businesses will inevitably struggle, and even public companies may come under suspicion if/when the true limitations of their shareholder agreements (hands off Asia!) become apparent. Meanwhile, private Asian companies will continue to increase (a) their visibility via sponsorship of European football teams, and (b) their overall market share.